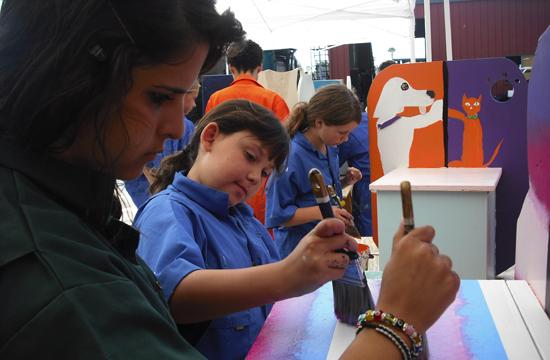 “[Rosie] is the symbol of ‘we can do it and women can do it too,’ ’’ says Carla Fantozzi, principal supervisor of the Santa Monica Rosie’s Girls program. “It’s been a powerful image for the camp and all of the middle school girls.”

Rosie’s Girls was created ten years ago by a group of researchers who, Fantozzi says, “wanted to empower middle school girls to develop their confidence because all the studies… found that once girls were in middle school, they began to lose confidence, felt that they were not as good as boys in math and science. They wanted to see if they could come up with a program that could turn that around.”

The camp that was created was a place where girls were introduced to the trades, helping them to develop their confidence and self-image. Rosie’s Girls has now become a series of camps around the U.S. with an elaborate curriculum.

In Santa Monica, Rosie’s Girls is a day camp, located at Stewart Street Park, with activities at sites throughout the city.

Fantozzi says that the girls are taught about media images of women and how they can redirect the stereotypes to more positive images. “But the real big part of the camp is working in the carpentry shop, building things.”

Other non-traditional activities that the girls learn include changing the oil in a car, learning how to lay asphalt or pour concrete, working with the City’s tree-trimming division, and participating in fire safety activities with the City Fire Department.

On field trips, the girls go kayaking and sailing and this year, will be getting a chance to participate in boxing.

After two years of participation, girls are no longer eligible for the Rosie’s Girls camp but Fantozzi notes that they can participate in “stepping stone” programs to keep them in touch with a group they have bonded closely with. This includes the Rosie’s Girls “Street Team,” which meets once a month and works on community service projects.

One recent Street Team project involved helping people make bags from recycled materials at a workshop at the Santa Monica Festival. Also, a member of the Rosie’s Girls Street Team sits on the City’s Commission for the Status of Women and helps them conduct surveys on the status of girls in Santa Monica.

According to Fantozzi, members of Rosie’s Girls and alumni are planning a conference for next June in honor of the organization’s tenth year.

Rosie’s Girls will be holding two sessions of camp this summer, one starting July 6 and ending July 23; the second from August 2 to August 20. The fee is $975 for Santa Monica residents; $1,290 for non-residents. Financial assistance is available for low-income families who live in Santa Monica.

Stewart Park, where the girls meet at the clubhouse, is located at 1800 Stewart Street, close to the City Yards. At the end of each day, girls are picked up from Stewart Park, which is served by Big Blue Bus Line 5.

By mirrormmg July 2, 2010
in Life and Arts
Related Posts