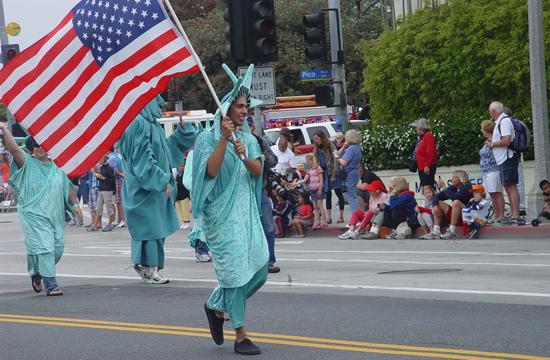 Thousands of residents and tourists lined up on Main Street on July 4 for the fourth annual Ocean Park parade to celebrate America, Santa Monica style.

Between 6 a.m. to 12 p.m., Main Street and some surrounding streets were closed off, so many attendees opted out of driving and chose to walk or bike instead.

The parade, which was organized by the Ocean Park Association, takes about a year to plan, according to OPA Vice President Ted Winterer.

“We start at the beginning of the year,” Winterer said. “We apply for permits from the City, start thinking about sponsorships, have preliminary discussions with police department and other departments at City Hall to make sure we’re on the same page. Things get more intense the last two to three months before the parade – we apply for a grant from [the] city council that covers all our City–related expenses and get sponsors so we can pay all of the bills.”

The parade kicked off at 9:30 a.m., with police leading the participants from the Pico Boulevard and Main Street starting point.

From Heal the Bay to Gondoliers of Ocean Park, about a thousand people from the community and organizations within the community flaunted their red, white and blue pride while walking the parade route.

“S-A-N-T-A M-O-N-I-C-A!” chanted a group of about 20 AYSO soccer players as they walked down the parade route.

Inky the Octopus, Santa Monica Pier’s mascot, blew kisses to the crowd as it rode on the Pier truck.

The Westside Rental spokesman got out of the car and danced to a jam promoting the business.

Students from the Santa Monica Malibu Unified School District walked alongside their parents holding up signs and banners that read “Save Our Schools.”

The Samohi Viking Band, Mariachi Solymar, the Ocean Park Gondolier Percussionists, the Fu Dogs and River Rouge, who were also on the parade route, provided music for parade attendees.

Parade participants also passed out American flags, candy, and flyers as they moved down the path.

Jasmine Jafari, a Samohi senior who participated in the parade, said it was fun being part of the community and representing the Red Cross.

“Volunteering with the Red Cross is one of the greatest experiences I get to enjoy in Santa Monica, so when they asked me if I’d walk in the parade I was ecstatic to represent,” she said. “Seeing the kids’ faces when we threw out candy was adorable. I was so surprised at how many people were cheering us in honor of our cause; it’s great to see such a great organization recognized. I would most definitely do it again.”

Matteo Fonda-Bonardi, a Santa Monica resident, has been an avid parade goer from the beginning. He said the best part of the parade has always been the community feel.

“It’s almost entirely made up of Santa Monica people and there are always happy faces around,” he said. “I liked seeing Santa Monica in full force; protestors, lowrider cars, bands.”

Elise Berry, who is originally from Iowa, said she enjoyed seeing Santa Monica residents come together.

“I liked that everyone and their dogs were out,” she said. “My favorite part was the line of classic cars with the hydrolics.”

Next year, OPA hopes to get more music for the parade and potentially another food vendor, Winterer said. Overall, he said, this year’s parade was a success.

“I think we’re probably bigger than we have been in the past years,” he said. “We had a lot of marchers out there and everybody seemed to be having a great time: That’s how you measure the success – everybody had a great time and nobody got hurt.”

By mirrormmg July 5, 2010
in Life and Arts
Related Posts