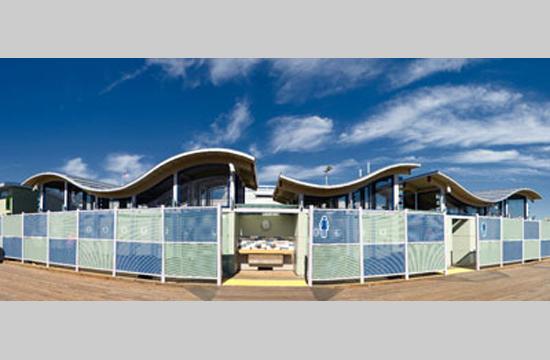 The new restroom facility on the Santa Monica Pier is one of ten finalists in the America’s Best Restroom IX Contest. Sponsored by Cintas Corporation, which provides services to businesses and manufactures restroom supplies, the contest is searching for the best restrooms in both the United States and Canada.

All restrooms that are open to the public are eligible and are judged on the basis of style, decor, use of materials, cleanliness, and customer comforts.

The Pier restroom facility was a long time in the making. In 2004, the Santa Monica Landmarks Commission first reviewed a proposal for a new restroom facility (all design changes and new projects for the Santa Monica Pier, a City Landmark, must be reviewed by the Commission). Changes to the design were proposed and modifications were made over the next three years, with approval of the design in March 2007.

The certificate of appropriateness for the restroom design reads in part: “Through contemporary design and materials, the new building reflects the whimsical character of the Pier and its physical evolution over the years. Specifically, the curved roof is in the tradition of Pier architecture which typically utilizes the roof as a strong design element. The wave-like design relates to the water and is reminiscent of a roller-coaster type form, evocative of the pleasure park theme on the Santa Monica Pier. The building features a color palette in sea-related shades of blue, gray, and white, with tile trim and art work on the exterior facades.”

Pier Restoration Corporation Executive Director Ben Franz-Knight told the Mirror that Cintas “went out nationwide and was looking independently for a number of restrooms to be considered in this contest. And the Pier restroom was one of the facilities that they selected. It was a great surprise and a treat for us on the Pier.”

“We’re up against some really stiff competition, both this year and historically. I think we’re one of the few really open public facilities being considered,” added Franz-Knight. “There’s others that are far more ornate…but a tremendous amount of effort went into these restrooms-it was a top priority for many, many years and I think it’s a testament to both the public process and the commitment of the Pier Restoration Board, City Council and City Staff, to make sure the Pier has the best possible facilities to serve the public.”

The contest’s web site, www.bestrestroom.com features photos of each facility as well as a “hall of fame” with past winners. Click on the photo of a restroom to get a “photo tour” of the facility, then vote with the online form. Santa Monica Pier photo shows a restroom stall with the blue, gray, and white tile trim that characterizes the facility’s design.

Votes will be taken through August 31, with the winner to be announced in September 2010.