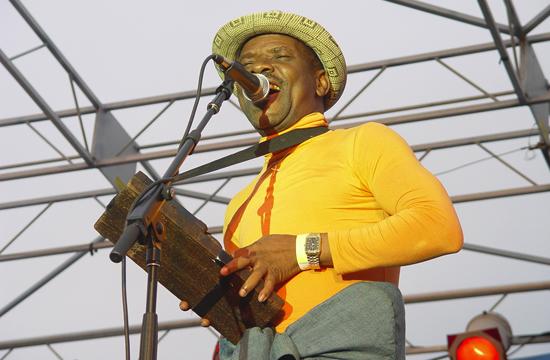 “Do you know what time it is?” the host asked the crowd. “Time to dance!” yelled one attendee.

“Time for Konono No.1!” screamed another. “It’s 7 p.m., the official start of the Twilight Dance Series!” the host said.

The audience cheered. Thousands flocked to the Santa Monica Pier on Thursday for the start of the 26th annual Twilight Dance Series.

This year, the series kicked off with Congolese dance-tronica group Konono No. 1. The group, who has been making music together for over 20 years, is known for using electric “thumb pianos,” hand-made microphones, and percussion.

Many attendees danced all night to the beat of the African drum; Others swayed to the voices of Konono No. 1 band members; And some just sat back and enjoyed the music from afar or on the sandy beach next to the Pier.

Carmen Martinez, a Santa Monica resident, came with her family because she is a regular to the Twilight concerts. “I come to the concerts as much as I can,” she said. “The best part is being here in the fresh air with all kinds of people and music.”

Others, like Margaret and Rick Woodman, were just in Santa Monica to visit relatives but heard about the concert and decided to stop by.

“Everyone seems to be having a great time listening to the music and dancing – you can bring your own food and be with family and friends,” Rick said, while dancing with Margaret.

The Woodman’s, who are from Redwood City, said they have free concerts like this in their town but “not as big of a venue” as the Pier.

“When you think about it, we’re listening to great music and not paying a dime,” Margaret said.

Billy Lewis, from West Covina, also came for the music.

“Wherever has good music, we go,” he said. Some came specifically to see Konono No. 1.

“I looked up when Twilight started so I could see them,” said Los Angeles resident Hazel Hernandez. “I like that they made their own instruments and they incorporate electronic dance music.”

Santa Monica City Council members and Matt Wright, host of this year’s series, introduced Konono No. 1 to the crowd and spoke about the importance of Twilight to Santa Monica.

Four months ago the concerts were in serious financial jeopardy but were saved by donors, the city of Santa Monica and Pacific Park, said council members.

They urged the crowd to donate so that the free concerts could continue.

Concerts are on Thursdays at the Santa Monica Pier at 7:30 p.m. through September 2.

By mirrormmg July 9, 2010
in Life and Arts
Related Posts