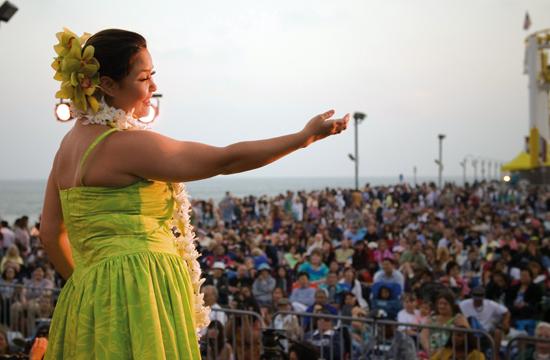 The 26th annual Twilight Dance Series kicks off tonight at the Santa Monica Pier as Congolese trance group Konono No.1 take the stage at 7:30 p.m.

The trance group is among a diverse array of talent being featured at the waterfront this summer ranging from ex-Rolling Stones to budding Australian Pop Stars. This year’s line-up, however, lacks both a Latin night and a reggae artist, two shows that have been perennial favorites.

Katherine King, one of the officials who helps select the talent, hopes to make up for the loss of those popular events by bringing international superstars Jovanotti of Italy and Kailish Kher of India.

“We work hard to get a mix of bands but it depends on who’s available for the least amount of money, and it just so happens we have these huge acts from Italy and India,” said King. “Kalish is like India’s Simon Cowell.”

Konono No.1 may be lesser known, but the group has been making music together for more than twenty years. Their electric “thumb pianos,” homemade microphones and makeshift instruments create a distortion-heavy sound that has led some critics to compare them to the most experimental forms of rock and electronic music.

The band is also heavily influenced by the sounds of their hometown in the Democratic Republic of the Congo where Bazombo trance beats are the music of choice.

King says it’s possible that the opening night turnout may be low due to the series starting a week later than it has in previous years and because Konono No.1 is not a household name. The police, however, are anticipating a full-scale crowd.

Additional officers will be specifically assigned to manage traffic and security at the event, and as always the pier sub-station will have officers on duty said Sgt. Jay Trisler of the Santa Monica Police Department.

Trisler also warned that concertgoers are not to bring bottles or cigarettes to the beach. The series continues every Thursday until September 2. All concerts are free.

By mirrormmg July 8, 2010
in Life and Arts
Related Posts