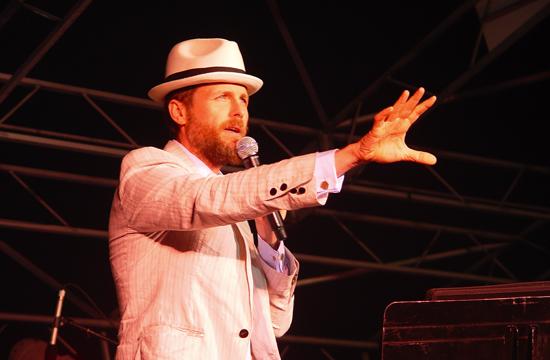 From Chilean rap to Italian funk, the third concert in this year’s Twilight Dance Series was far from monotonous.

The Santa Monica Pier was again filled with thousands of Santa Monica natives, tourists and fans of the musicians on Thursday.

The venue was so packed that many also crowded the beach with blankets watching the concert on a screen that projected all three acts throughout the night.

“We studied abroad in Italy last year and we just fell in love with his music,” Leon said.

The three friends also made a poster that read: “TVB Jovanotti,” an abbreviation for te volio bene, which translates to “we love you.”

They especially love his upbeat tunes.

“It’s fun, upbeat and happy – all great to dance to,” Miller said.

MC of the night was KCRW’s Gary Calamar, who encouraged the crowd to listen to KCRW, donate to the Twilight series and Santa Monica-Malibu Unified School District.

“We have some amazing acts on this beautiful night – free show at the Pier, it’s a beautiful thing all around,” he said.

First up was Ana Tijoux, a Chilean rap artist who performed songs from her new album.

“We’re happy to represent Latin America,” she said to the crowd. “We have a lot of hip-hop there too.”

Tijoux rapped in both Spanish and English, jamming over beats played by a DJ.

Next came Texan singer and songwriter Jace Everettt, most famous for his song “Bad Things” which is the theme song for HBO’s popular series “True Blood.”

Before performing that hit, Everett joked “No, I don’t know Bill and Sookie [the main characters of the show]. . .they’re not real.”

Everett did not have a band. Instead, he performed alongside his best friend Dan Cohen, who rocked out on electric guitar while Everett played electric and sang.

And finally, the anticipated headliner Jovanotti came on stage and the entire crowd began screaming.

He asked the audience if anyone spoke Italian and then joked “This is sort of a revenge because I always listened to American music and didn’t understand so now you will listen and not understand.”

The crowd applauded and laughed.

“My name’s Jovanotti and I am an Italian dude,” he said, before jumping into his songs.

The Italian superstar had a huge stage presence, getting the crowd dancing and singing along to his Italian funk.

He left the stage at around 9:30 p.m. and the Pier crowd slowly began to disperse.

By mirrormmg July 26, 2010
in Life and Arts
Related Posts