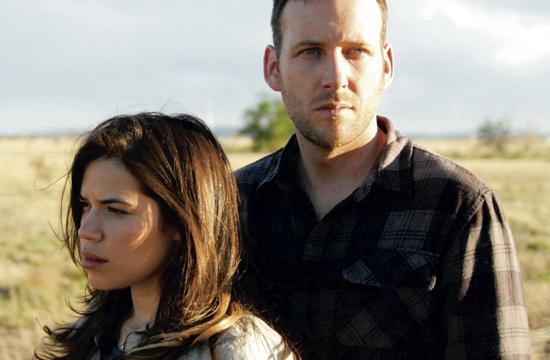 America Ferrera’s role in “The Dry Land” is her most adult and dramatic acting job to date, proving that the young actress has moved beyond the television acting of “Ugly Betty” that made her a household name.

Her characterization of Sarah, the devoted but conflicted wife of a Iraq veteran returning from war, establishes her a serious silver-screen actress capable of doing more than just “girlie” roles.

Her character speaks for the countless number of wives of veterans who helplessly deal with their husband’s Post Traumatic Stress Disorders.

Editor’s Note: The following interview has been edited for print purposes.

Mirror: Was this the most emotionally challenging role for you?

Ferrera: (Pause) That’s an interesting question. I don’t think I can really compare it to anything else I’ve done because every role I take on is a challenge. I would say that this is probably the most grown-up role that I’ve gotten to play. It’s clearly the most timely and serious role because it has such an immediate resonance to what’s happening in our society. It was challenging, but in some ways I felt like I could relate to Sarah more than some other characters I’ve played.

Ferrera: Because I’m not a woman who has a husband at war, I had to connect to this character on a human level and try to understand her journey outside of the military context. She has a partner in life who comes home and is inaccessible behind his eyes. How do you get him back? How do you find that person that was supposed to be there forever? That felt like an easier thing to relate to than how I would feel if my husband went off to war.

Mirror: Because of your special relationship with the writer/director Ryan Piers Williams, and your role as executive producer, you were probably involved with the development of the character of Sarah from the beginning. Did that give you a different perspective on her?

Ferrera: Originally I was only going to be the executive producer and didn’t have any intentions of playing Sarah. I offered the role to many of our friends hoping they would attach themselves to the project and help us get it made. As the executive producer, I had to look at the picture as a whole and to think about the role of each character. Ryan and I had many conversations and discussed every character in depth. He wanted the actors to do their homework and to feel an obligation to making this authentic and not act as a Hollywood actor. This gave me deep perspective, so when I decided to play Sarah I could then stay fully focused on just her.

Mirror: How did the military’s cooperation help you prepare for the role?

Ferrera: They literally handed us phone numbers of women from different parts of the country who were willing to talk to me. We had very open and candid conversations, some of which started out a little tentative, but by the end, their stories would pour out of them. They’re a whole other side of the coin because we focus on the soldiers and not on the family members and spouses who sacrifice so much and live in constant fear that their loved ones are in imminent danger.

I heard stories where it ended in the worst-case scenario and others where it ended in the best-case scenario where a soldier admitted he needed help which saved the marriage. Sadly, more times than not, it went in the other direction. Oftentimes the wife feels guilty because she doesn’t know how to heal her husband, but before he can be healed, he has to ask for help. But at a certain point when is it PTSD and when is it domestic violence and the wife is in danger?

Mirror: What was the main thing you discovered in talking to these women?

Ferrera: They feel invisible. It’s all about concern for the soldiers. One thing I’ll never forget is what one woman whose husband has PTSD said to me: “I allowed myself the thought of would it have been easier if he didn’t come home”

That’s incredibly heartbreaking because we, as the outsiders, think they come home and they’re safe and there’s a happy ending. But the truth is when they come home, they are actually fighting a second war.

Mirror: What was the most difficult scene to shoot?

Ferrera: There were a lot of difficult scenes, but I think for me it was the bathroom scene where Sarah is trying to connect to James on all sorts of levels, including sexual, but nothing is working, and she’s left wondering if she can win this battle to find what used to be her husband.

Mirror: You showed this film at the Edinburgh Film Festival and it won Best International Feature. Did the Q-and-A’s differ from when you showed it to a military audience?

Ferrera: The Q-and-A’s after the screening were just as reactive and responsive. In Scotland alone, they’re having a problem with the huge percentage of incarcerated men who are returned vets. Clearly we have to deal with this at home, but it’s a conversation that’s global. We train men to fight, but then how do we reenter them into society.

Mirror: What was the purpose of your visit to Iraq?

Ferrera: We didn’t screen the film, but talked a lot about it with the soldiers and in some cases showed a trailer so they’d have an idea of what the film was about. We were mainly there to meet and greet.

Mirror: Ryan O’Nan (who plays James, the husband in the film) gave us his take on screening the film for soldiers. What was your reaction to the screening? [“A Moment With… Ryan Piers Williams & Ryan O’Nan,” Santa Monica Mirror July 30 – August 5, 2010].

Ferrera: Ryan’s vision was to tell a story that was authentic – a story that a soldier or a soldier’s family member could sit and watch and say, “Yes, that’s true, that feels real to me.”

We screened the movie at Fort Carson for approximately 600 to 700 soldiers on active duty and their spouses. These troops had just returned from Iraq or Afghanistan or were shipping out in a week. The response was amazing and sparked really interesting one-on-one discussions about their versions of the story.

Mirror: What do you hope to accomplish?

Ferrera: Our goal was to relate to the soldiers and their families and to stimulate conversation. We hoped they would feel that it was a non-judgmental, compassionate portrayal and not a politically skewed film with a certain agenda.

Mirror: Will you be doing any volunteer work with returning vets?

Ferrera: Our biggest hope is to show the film on military bases around the U.S. to stimulate conversation. As a companion to that we are screening the film for civilian audiences with the hopes that bridges will be built and communities become inspired to help. Whether we agree with the wars or not, we owe it to our returning troops to help them assimilate back into civilian life and to give hope to their families.

Mirror: Best of luck with your film.

Ferrera: Thank you very much.

By mirrormmg August 5, 2010
in Life and Arts
Related Posts