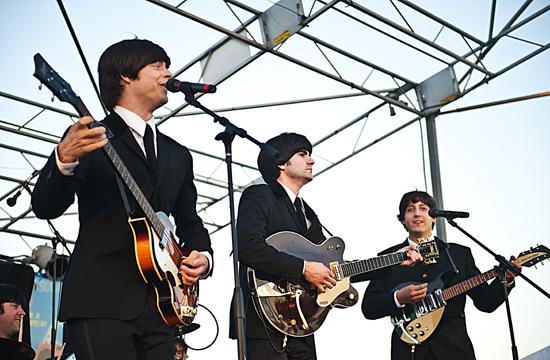 The last weekend of August saw a “British Invasion” on the Santa Monica Pier, with the three-day “Beatlesfest 2010” event, kicking off Thursday evening as part of the Twilight Dance Series.

The festival, which had a successful run at the Queen Mary in Long Beach last year, was booked at the Pier this year in a “trial run” with the hope that its popularity will grow. Certainly the enormous crowd that turned out on Thursday promised that the event has a future in Santa Monica.

Outside the concert area on the Pier, vendor booths sold Beatles memorabilia (a Beatles monopoly game and Beatles dolls in Sergeant Pepper outfits were among the items for sale) and Beatles albums and T-shirts.

Natalie Joy Stoddard, a face painter at one of the booths in the concert area, painted faces with peace symbols, flowers, butterflies, and even a “Yellow Submarine” in keeping with the Beatles theme.

Beatles radio news (KLOS) reporter Gillian Lomax gave out flyers for her “Magical History Tour” of Beatles-themed locations in Los Angeles. “The tour begins and ends in Santa Monica,” she told the Mirror.

At another booth, Greg Adamson sold paintings of celebrities that he paints while listening to music. Adamson demonstrated his skills in a live performance at the Twilight Dance Series stage, quickly painting a face-front portrait of John Lennon as Beatles songs played on the PA system.

Thursday’s lineup for the Series featured Abbey Road, a Beatles tribute band, and Led ZepAgain, a Led Zeppelin tribute band. “Having Beatles music all day is great, but people also like the fact that you still have your variety,” said Beatlesfest producer Fred Zermeno.

Abbey Road’s four members were dressed in the high-collared suits and pudding-basin hairstyles of the 1964 Beatles and their set, composed of familiar Beatles standards like “I Want to Hold Your Hand,” and “This Boy,” had an authentic Beatles sound. The band has been together for less than a year, according to Tyson Kelly, who plays and sings the role of John Lennon. The other band members, all in their 20s, are Benny Chadwick as Paul McCartney, Robert Beilma as George Harrison, and Axel Clark as Ringo Starr.

Following Abbey Road, Led ZepAgain also provided an eerie déjà vu of being at a real Led Zeppelin concert of the late 1960s. They sounded like the Zep, even to the wails of Robert Plant, and their lead guitarist replicated Jimmy Page’s complex solo breaks and long improvisations.

The weekend continued with more bands playing from 10 a.m. to 7 p.m. on Friday and Saturday, and vendors still holding forth on the Pier.

Audiences had the opportunity to engage in Beatles trivia and Beatles karaoke and also sit in a tent and watch videos of actual Beatles concerts, courtesy of Ace Karaoke stores.

The festival concluded with Ticket to Ride, a musical about the Beatles’ career as a rock band, performed at Santa Monica High School’s Barnum Hall on Saturday evening.

The Twilight Dance Series concludes this week with Dr. John and the Lower 911 and Eddie Baytos and the Nervis Brothers, playing New Orleans style music, on September 2.

By mirrormmg August 27, 2010
in Life and Arts
Related Posts