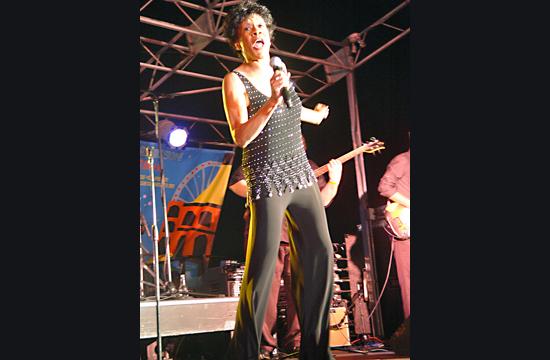 Bettye LaVette may not be a Rolling Stone, but she still rocked the Pier for the seventh Twilight Dance Series concert on Thursday.

Mick Taylor, former Rolling Stone guitarist, was supposed to perform in LaVette’s place but canceled his performance due to health and management issues. However, the Santa Monica crowd was far from disappointed.

The Tom Nolan Band, who opened for LaVette, got the crowd super energized with harmonica, saxophones, guitar, tambourine and vocals. With lead singer Nolan’s help, the audience sang along to a number of the band’s songs, even if they didn’t know the lyrics.

“Santa Monica, you sound so good,” Nolan said, after coaxing the crowd to sing “Ooh yeah” with the band.

The lively attendees was dancing all night, especially when the group performed covers like “(Your Love Has Lifted Me) Higher and Higher” by Jackie Wilson, which they closed with.

The crowd demanded an encore but it was already time for intermission. However, the band also played a show at Rusty’s on the Pier later that night.

Wright still encouraged attendees to donate for both SOS and Twilight, so the concert series can continue in the years to come.

Finally, LaVette made her grand entrance on stage and sang “The Word.” She joked that she may not be able to see the audience but they can hear her, that is if the lights don’t blind her and cause her to fall off-stage.

Whether she was singing slower songs or dancing around stage to upbeat rhythms, LaVette gave an all-around energetic performance. She sang songs from her Grammy nominated album “The Scene of Crime” and her newest album “Interpretations: The British Songbook,” featuring covers of bands such as Led Zeppelin, the Beatles, Pink Floyd, Eric Clapton and even the Rolling Stones.

“We thank you,” she said the crowd after many of her songs.

Her rich gospel voice moved the crowd to dance, sing along, and call out: “We love you Betty!”

Next Thursday-Saturday is the much-anticipated Beatlesfest, which will feature movies, music from cover bands like Led Zepagain and memorabilia.

By mirrormmg August 20, 2010
in Life and Arts
Related Posts