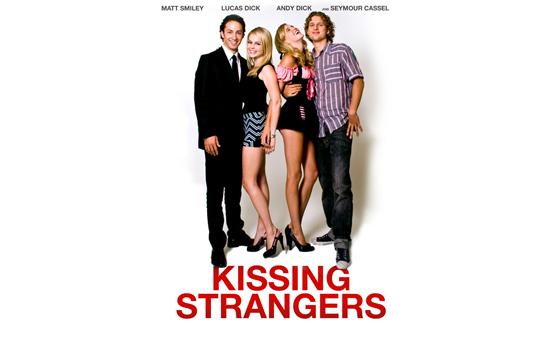 The Santa Monica International Film Festival showcases independent work from around the world this Saturday, Aug. 7 at the Aero Theater on Montana Avenue.

The SMFF will host seventeen films and filmmakers at this year with most from the U.S., although a few are from Germany and Canada. A complementary event will open the festivities at 10 a.m. with a filmmaker networking breakfast. Screenings then run until the feature showing of the night at 7:30 p.m.

The festival’s feature is the romantic comedy Kissing Strangers directed by Santa Monica filmmaker David Katz. Academy Award nominee Seymour Cassel and comedian Andy Dick appear in supporting roles with a of cast relative unknowns. The film’s plot centers around a bet between friends on who can kiss the loveliest lady and the pursuit that ensues.

Question and answer sessions with the filmmakers will be available for special screenings.

The Festival Awards Reception will be held at the Loews Santa Monica Beach Hotel. The event is presented by Patron of the Arts and philantropist Lilly Lawrence, better known locally for as the New York socialite that lives in the Castle Kashan in Malibu.

For more information about ticket prices and for a complete list of films visit www.smfilmfestival.com. The Ticketweb.com box office can be reached at 866.468.3399 or tickets can be purchased at the Aero Theater.

By mirrormmg August 7, 2010
in Life and Arts
Related Posts