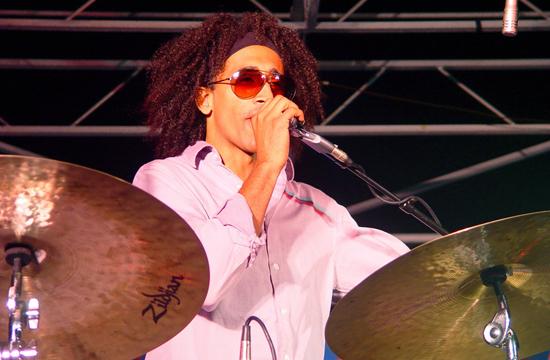 Bands Soulive and Breakestra took the Santa Monica Pier to funky town at the sixth concert in the Twilight Dance Series on Thursday.

Host Matt Wright kicked off the evening by introducing mayor pro tempore Pam O’Connor, who presented the guest of honor former KTLA anchor Stan Chambers with a proclamation from the City of Santa Monica for his work as a Southern California news anchor for the past 63 years.

O’Connor listed the assassination of Robert Kennedy and the Northridge earthquake as some of Chambers’ notable stories.

Chambers, who recently announced his retirement, has also won many awards and has a star on the Hollywood Walk of Fame.

“On behalf of the members of City Council and the City of Santa Monica, we are proud to award you this proclamation,” O’Connor said. “And commend you for 63 years of service.”

Chambers was grateful for the proclamation.

“It’s great to be back here on the Pier,” he said. “This is such a historic place and the heart of Santa Monica. This is what it’s all about – the beach, the weather, the sun. We are all very lucky here in California. Hail California! Thank you for this honor.”

At about 7:30 p.m., opening group Breakestra came on stage.

The group, who recently returned from a world tour, began their set with a song dedicated to funk drummer Riche Hayward who recently passed away.

The crowd began grooving to the sounds of saxophone, drums, guitar, keyboard, vocals and even the cello.

“How many of you all are cool like that?” singer Mix Master Wolf asked the crowd. “Snap your fingers and act like you’re beatniks of the 60s. . . we’re getting funky.”

The audience snapped, clapped and cheered.

During intermission, Save Our Schools went around the Pier asking for donations because it was the last weekend to raise the money.

At about 8:45, headlining band Soulive walked on stage.

Brothers Alan and Neal Evans along with guitarist Eric krasno combine jazz and funk sounds with just a bass, keyboard, and guitar.

The organ trio rocked the stage and got the crowd on their feet dancing to their catchy tunes until about 9:30 p.m.

Steve Penate, who was visiting Santa Monica from Phoenix, Arizona, said he came because he heard the music as he was walking on the Pier.

“We saw the band practicing and decided to stay,” he said.

Penate and his girlfriend are both fans of this genre of music.

“There is actual music talent,” he said. “It’s not recorded – it is live.”

“Who doesn’t love funk?” she said.

By mirrormmg August 13, 2010
in Life and Arts
Related Posts