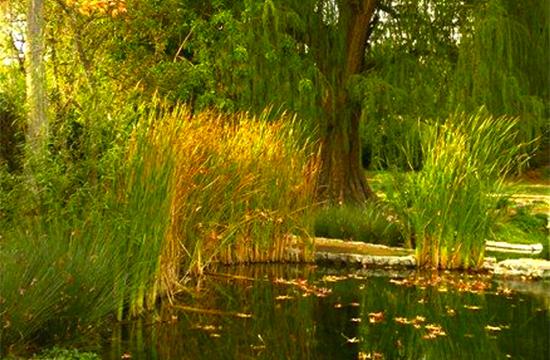 CORRECTION: This story originally had an error in it, regarding the location of a possible parking garage. That error has been removed and corrected in this version of the story and a further explanation of the correction is at the end of the article.

The natural springs from which the city of Santa Monica draws its name are in danger. For the moment, the Kuruvunga Springs are preserved in a secluded, idyllic, and generally inaccessible corner of the University High School campus in West Los Angeles. They are guarded by the financially precarious Gabrielino/Tongva Springs Foundation, which has been faced with development plans for property immediately adjacent to the springs, many native plants, and a medicine wheel.

Angie Behrns, president of the Foundation and a descendant of the Gabrielino/Tongva people, explained that Father Crespi, the diarist of the 1769 Portola expedition exploring the Los Angeles basin, said that the springs reminded him of “the tears of Saint Monica” (the mother of St. Augustine, who gave her a lot to cry about before he saw the light). The waters eventually flowed to the Pacific Ocean at Santa Monica Canyon and gave that canyon its name, which in turn lent its name to the city on the bluff above the canyon.

The springs were one of 10 sites on an “Adventures in Santa Monica” tour presented by the Santa Monica Conservancy on Sunday, August 15. The outing, organized by the Conservancy’s Dick Orton, invited tourers (not “tourists,” as all seemed to be locals) to make their own way among a very mixed bag of destinations, including:

• Places we all know by sight but may never before have been inside, like Angels Attic museum of doll houses and toys on Colorado Avenue near 5th Street and the upper floor of carousel building on the Pier;

• Places we see all the time but didn’t know what was there, like the California Wash Mural on the ocean front walk at the foot of Pico Boulevard between Shutters and Casa del Mar hotels and the nearby Inkwell beach – the solitary spot where the black community could enjoy the sand and surf in reasonable comfort until long after California outlawed racial discrimination on public beaches in 1927;

• Places that may be entirely new to us, like the artists’ studios at Santa Monica Airport and the remarkable pre-fab, modular home built by LivingHomes that looks and feels like an architect’s dream just west of Lincoln Boulevard near the Santa Monica/Venice city line.

No matter how familiar the location, Conservancy docents at the site provided information that was new even to old-timers.

At Woodlawn Cemetery, Popeye the Sailor Man stood by the gravesite of Elzie Segar, the Santa Monica cartoonist who created the character based on Pier fishing boat operator Captain Olaf Olsen. Popeye, known to his friends as actor Dustin Harnish, chatted with tourers in character, and Conservancy docents pointed out the gravesites of other notables from Paul Henreid to Jesse Unruh.

Angie Behrns of the Gabrielino/Tongva Springs Foundation told tourers that the foundation has a 20-year lease from LAUSD covering the immediate springs property, but that 1994 lease will run out soon. Moreover, a new YMCA planned for nearby property at Ohio and Westgate Avenues wants to put a parking lot on undeveloped property abutting the springs.

Since Behrns and her brother Daniel Dorame began climbing over fences to visit and care for the site in 1992, its future has been uncertain even though it is designated a California State Historic Landmark according to Sunday’s Conservancy brochure. Once a thriving Gabrielino/Tongva village that existed from circa 400 BC until the arrival of the Spaniards, the springs now host an under-development museum building – rather like a roomy construction-site headquarters shack – that should be open with exhibits in time for the “Life Before Columbus” festival scheduled for 11 a.m. to 4 p.m. on September 26.

Otherwise, the springs are open to the public on the first Saturday of each month from 10 a.m. to 1 p.m. at 1439 Barrington Avenue, between Santa Monica and Wilshire Boulevards (west side of Barrington, between Ohio and Texas, free parking).

CORRECTION: The last sentence, in the opening paragraph of this story originally and inaccurately stated that the YMCA planned to build a parking lot on part of the Kuruvunga Springs property. Mark A. Vezzola, staff attorney with California Indian Legal Services, which represents the Gabrielino/Tongva Springs Foundation, wrote, “While at one time it was unclear to the members of the Gabrielino Tongva Springs Foundation if the 2.5 acre parcel containing these natural springs, many native plants and a medicine wheel, would be threatened by a proposed parking lot, a July meeting with the YMCA and the principal of University High School confirmed that the YMCA has no design on the area for parking.” Foundation president Angie Behrns, referenced in the article, confirmed that, to the Foundation’s knowledge, the YMCA has no design on the land – now under lease to the Foundation – for parking or any other reason. However, the adjoining property now occupied by the Los Angeles Unified School District’s Indian Springs continuation school, may be subject to other development.

By mirrormmg August 19, 2010
in Life and Arts
Related Posts