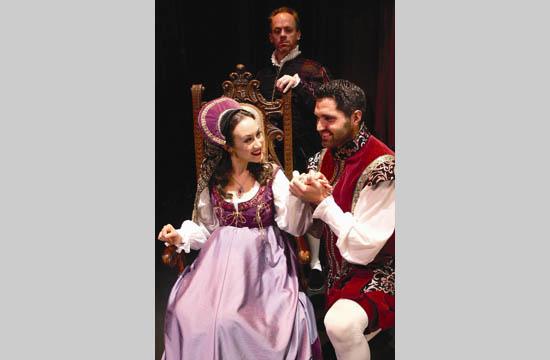 For 15 years the Troubadour Theatre Company (“Troubies” to their fans) have built an avid following with their productions of Shakespeare plays done as “jukebox musicals,” with the songs of classic rock artists and a hefty dose of commedia dell’arte. After residencies in various LA venues including Santa Monica’s Miles Memorial Playhouse, the Troubies have a home now at the Falcon Theatre in Burbank where their latest show, A Withers Tale, follows their familiar formula but adds a new dimension of poignancy.

In the past, Troubie shows such as Fleetwood Macbeth and Much ADoobie Brothers About Nothing, mixed music and Shakespeare with slapstick and ad-libs. While A Withers Tale has some of the usual frivolity, the original play’s sad theme-the consequences of marital jealousy-seems to have led the troupe to play the early acts fairly straight, making for a more subdued tone than expected.

Leontes (Troubie leader Matt Walker) the king of “Toluca,” suspects his boyhood friend and house guest Polixenes of “NoHo” (Matt Merchant) of adultery with his wife Hermione (Monica Schneider). He plans to have Polixenes poisoned; his servant Camillo (Mike Sulprizio) refuses to do so and flees the country with Polixenes. Hermione is tried for adultery and treason; Leontes denies even the evidence of an oracle (Lisa Valenzuela, who belts out a song like a Motown vocalist). His unfounded paranoia and anger leads to the seeming destruction of his entire family.

Eighteen years later, the meeting of the two kings’ offspring, and their mutual love, results in reconciliation and a happy surprise at the finale.

Possibly because The Winter’s Tale is one of Shakespeare’s less-traveled plays, Walker and company have tampered somewhat less with its melancholy aspects. The trajectory of Leontes’ personal tragedy is handled with a rare finesse here. Walker, who teaches clowning at universities and is a superb clown, proves that he can also portray real anguish-the tragic clown, if you will.

For those who are used to the rapid-paced silliness of most Troubie productions, the seriousness of the first half of A Withers Tale may prove disappointing. The humor does come but it is of a gentler style than usual. A shady servant (Travis Clark) gets hilariously eaten by a bear (actually the “Jabberwocky” creature from a previous production) and Walker, who doubles in a real clown role, does a hat trick and indulges in some typical ad-libs.

Bill Withers is a singer-songwriter who had some hits back in the 1970s but seemed, to this writer, like a lesser music choice than the super rock bands whose music is usually the spine for Troubie shows. However, the songs chosen here work quite well. The classic “Ain’t No Sunshine When She‘s Gone” is used to express Leontes’ regret over his treatment of his wife, while “Lean on Me” accompanies the forgiving reunion of the two old friends.

Cudos to the adroit comic performance of Valenzuela’s other role as Leontes’ jolly son Mamilius, to Katherine Malak’s beautiful singing voice as Perdita, to the dancing and physical comedy of the ensemble, and to the hot Troubie band, led by Eric Heinly.

A Withers Tale is a nice change of pace for the Troubadour Company but as they are so cosmically gifted at side-splitting silly stuff, let’s hope that their next production is more seriously funny.

By mirrormmg August 23, 2010
in Life and Arts
Related Posts