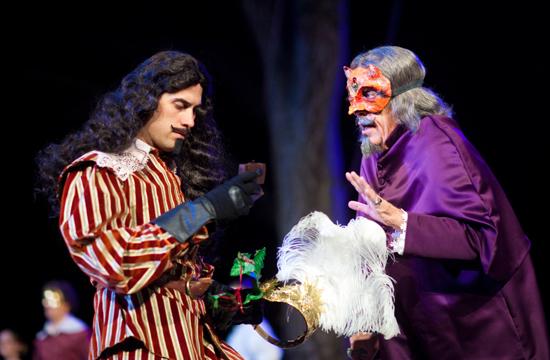 Athos (Jim LeFave), Porthos (Kelly C. Henton) and Aramis (Melora Marshall), perhaps the most famous trio of swashbucklers to grace the pages of 17th Century French literature, fight evildoers on behalf of King Louis XII in an adaptation of Alexandre Dumas’ “The Three Musketeers”. Director and adapter, Ellen Geer, keeps the story steeped in the swordplay of the threesome, while, of course, giving plenty of stage time to the central swordsman in the gang, the green d’Artagnan (Jackson McCord Thompson), whose dream of becoming one of the King’s most trusted guards is the hook on which the plot is hung.

Though various stage and film versions of the text have been produced, Geer’s adaptation does a few out-of-the-ordinary things, the most obvious of which is the inclusion of several scenes featuring the vicious Milady (Abby Craden), a sexy follower of the dubious Cardinal Richelieu (William Dennis Hunt). It’s nice to see a female of some substance and cunning included in the male-centric work, but Craden’s ham-fisted performance does little justice to the calculated character.

Set during a time of bitter strife between Catholics and Protestants, the story of four justice-seeking men is a nice blend of history and fanciful romance. But things get a bit too fanciful in this production, especially during an out-of-the-blue musical number depicting the French monarchy’s plot to destroy the Huguenots by hemming them in and creating a famine at their stronghold, La Rochelle. The decision to insert song into this otherwise straightforward history play is a stylistic misstep.

The heart and soul of the story remains the men who fight for honor, the fearless foursome of adventure-seekers. All four actors show up with solid performances, but the story gets mired in endless exchanges of letters and questionable loyalties. It’s enough to let the musketeers be dashing heroes without dragging audiences through every detail of the forces against which they fight. The one risk that pays off in spades is the casting of a female, Marshall, as a macho Musketeer; her sword is as mighty as any man’s, and it’s a pleasure to watch her wield it.

By mirrormmg August 16, 2010
in Life and Arts
Related Posts