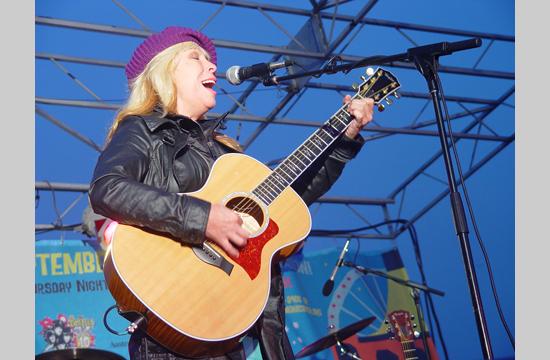 Musician Rickie Lee Jones lived up to her title as “duchess of coolsville” when she rocked the Santa Monica Pier for the fifth concert in this summer’s Twilight Dance Series.

Jones, who has received five Grammy nominations, is a self-proclaimed “lower-middle-class-hillbilly-hipster” who sings everything from folk to jazz.

Bloomingdale’s, the main sponsor of Thursday’s concert, gave out canvas bags with Frisbees, sandals and cards with the opportunity to win a $1000 shopping spree to the store.

“It’s important for us to be tied to the community we serve . . . so we were excited to get on board for the Twilight Dance Series,” said Anderson.

Jones walked on stage at about 7:30 p.m. and the crowd cheered.

“This is an old school show with old school tunes,” she said before starting her set.

After performing her first song, Jones expressed how happy she was to be performing again.

“We love you,” screamed another.

Jones then jumped back into some of her popular tunes like “Easy Money,” a song she first recored in Venice.

People clapped and sang along to all Jones’ songs, even the more mellow ones.

“I love playing with this band,” she said. “It’s been many years –thank you guys. You don’t know how blessed I feel right now.”

Epi Inocencio, a Los Angeles native, came to the Pier concert with her niece Sara Sochayseng who was visiting from Singapore.

“I like the idea of this concert because it’s a bunch of people who like music and are enjoying Santa Monica,” Sochayseng said.

Santa Monica local Stephen Frigyes said despite being a Santa Monica resident for about 40 years, he had never heard about the Twilight Dance Series, but came because he heard Jones was performing.

“We’ve never been to one of these and we thought it would be a good idea,” he said. “Especially because it’s Rickie Lee Jones.”

By mirrormmg August 6, 2010
in Life and Arts
Related Posts