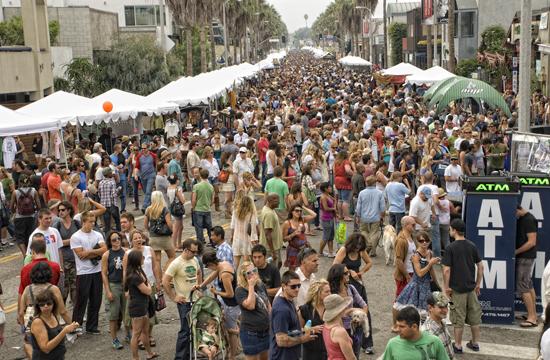 Is it possible to get a slice of pizza, talk to your neighborhood council representatives, register for the AIDS Lifecycle at a discounted rate, ride a Ferris wheel, and listen to dozens of live bands, all in the same location? If you hit the 26th annual Abbot Kinney Festival on Sunday, September 26, you could have done all this and much, much more.

Despite the record-breaking heat, thousands of people showed up for the festival, an all-day affair that shut down vehicular traffic on the one-mile strip of the famously eclectic retail, art, and dining district. Abbot Kinney is to Venice what Montana Avenue is to Santa Monica – a boutique shopper’s delight. The droves of people at this year’s festival were evidence that the festive vibe is alive and well on the street where Abbot’s Habit and Intelligentsia Coffee Bar attract hipster java lovers and countless art galleries pack their houses during openings. During the festival, the number of shops on Abbot Kinney double, with the 110 regular merchants being joined by scores of booths selling everything from lemonade to sun dresses.

Hundreds of people came to and from the festival by bicycle, peddling to and from all day long, parking their bikes (free of charge) at two special bike valets at Broadway Court and Milwood Avenue. This reporter spent much of the day at the Milkmade stage, where local bands kept the music pumping all day. Francisco the Man was one of my favorites of the day. The beer garden was also brimming with activity, as was the Food Rendezvous, a new exhibit this year that brought together more than a dozen local food vendors at the Electric Lodge. Two local food lovers, Laurie Dill and Dominique Leveuf, set up this section of the festival, inviting food writers, chefs, and farmers to be a part of the culinary fun. Vendors included Candy’s Gourmet Meats, Best of the Wurst, and the Sensitive Baker.

As a testament to the focus on green living in Venice and Santa Monica, Whole Foods Market, a major sponsor of the festival, had an area dedicated to vendors whose eco-friendly products are sold at Whole Foods. Giveaways were a popular draw here – visitors walked away with bottles of Wolfgang Puck Iced Coffee, bags of low-cal Popchips, and more.

The permanent shops were also hopping – at Lilly’s, people streamed in all afternoon for homemade sangria.

As evidence that the festival is not just about food and fun, the Abbot Kinney Festival Association awarded grants to the following 10 Venice nonprofits and recognized their commitment to the community: 826LA, Beyond Baroque, Electric Lodge, Venice Arts, Venice Chamber of Commerce, Venice Community Garden, Venice High School Robotics, Venice Historical Society, Venice Surf and Skateboard Association, and A Window Between Worlds.

By mirrormmg September 28, 2010
in Life and Arts
Related Posts