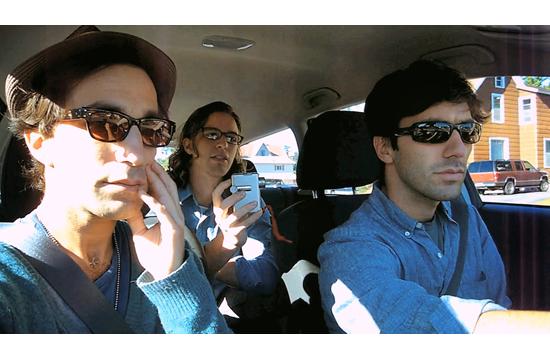 Joost and Schulman thought the story of Schulman’s brother, Nev, would be an interesting one to track, but they had no idea things would heat to the extent that they do in the finished product. It all starts when 24-year-old Nev, a photographer who shares an office with the two filmmakers, gets a painting in the mail from eight-year-old Abby, who commits one of Nev’s published photos to canvas. Intrigued and touched, Nev becomes Facebook friends with little Abby and eventually falls in cyber-love with her 19-year-old sister, Megan. In fact, Abby’s whole family gets involved in the blossoming, long-distance romance, when her mother, father, brother, and a slew of family friends become Nev’s Facebook pals.

It’s nearly impossible to outline any more details of the plot without adding a spoiler. Suffice it to say that things aren’t as they seem, and the three guys hit the road in an attempt to separate fact from fiction.

The film works on several levels, not the least of which are the tools the young filmmakers employ to tell the story. Google maps locate our main characters and trace their steps, while close-ups of cursors pointing and clicking to accept Facebook friend requests keep us firmly planted in Nev’s point of view. We see much of what he sees as he’s trolling and scrolling on Facebook, including lots of smiling, friendly faces, people we’d all like to call friends. From tight close-ups of smartphone conversations and G.P.S. screens to the use of hand-held cameras during covert operations that happen midway through the film, we are constantly engaging with the myriad technologies that get our main character entangled in a messy act of deception.

But slick storytelling devices are only a fraction of what the film has to offer. The filmmakers have a deep sense of compassion for those who use Facebook as an online-fantasy land. The boys don’t bash the liars, they try to understand them, showing a sensitivity that ultimately makes this a truly touching and important tale. Nev’s self-deprecating sense of humor is also a giant asset — he’s an open-hearted, adorable young guy who has learned at a relatively tender age how to laugh like hell at his own foolishness. Nev’s “a-ha” moments are more than refreshing, they are part of an important point of view for people who are relying on Facebook, Myspace, and the Internet for love and affection. You gotta have more than that, the film ultimately tells us, or you risk getting hurt in a major way. A final lovely truth of the film is that, in the end, an unlikely friendship forms, a union that would not have been possible without Facebook.

By mirrormmg September 30, 2010
in Life and Arts
Related Posts