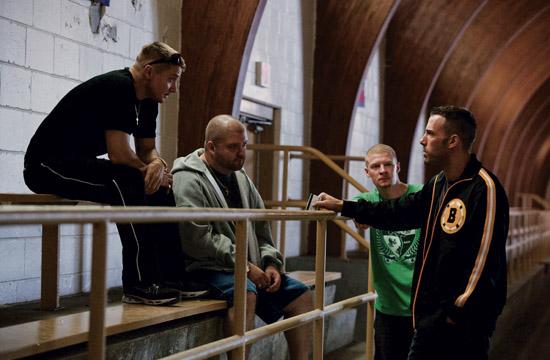 Banks get robbed and armored trucks get knocked over to gripping effect in “The Town,” but the best thing about the film is actor/director Ben Affleck’s expertise on all things Boston, its accents, its knuckle-headed buddy boys, its narrow North End alleys, and its landmarks that make for great sweeping, birds-eye view establishing shots.

Based on the novel “Prince of Thieves,” by Chuck Hogan, the crime-ridden caper takes place in Charlestown, a neighborhood of Boston that has produced more bank and armored car robbers than anywhere in the United States. Doug MacRay (Affleck) is one such crook, a former hockey star who blew his chance to break away from the criminal lifestyle passed down to him by his father (Chris Cooper). Instead of playing for the pros, Doug becomes a pro at armed robbery, leading a gang of four thuggish, money grabbers all over the city on multiple heists. Though Doug is smart, talented, sober, and searching, he’s having trouble busting loose from his lowlife partners in crime. The strongest tie he has in the group is with Jem (Jeremy Renner), a borderline psychotic and lifelong friend of our anti-hero. Jem has done more than a few favors for Doug over the years and he expects blind loyalty in return. But Doug begins to doubt his future in crime when he meets Claire (Rebecca Hall), a bank manager the boys briefly kidnap during a hold-up. When Jem wants to check up on Claire after the fact, Doug decides to take on the job himself. But love gets in the way and Doug can’t seem to get it straight that Claire is a threat to his survival, not wife material.

The emotional dilemmas here feel a little thin, and watching Doug wrestle with his choices isn’t exactly compelling. Should he stay loyal to the friends who’ve sacrificed their lives for him, or should he abandon them for a happy romance? It’s a little hard to care and even harder to believe this career criminal would let love-sickness distract him so fully. That said, the acting is so good here, plot plays second fiddle to rich character exploration. Renner and Cooper are the clear standouts, both playing men determined to stay on crooked paths despite growing evidence that their commitment to crime will be their demise. Jon Hamm brings convincing doses of good-guy determination to the scene as the FBI agent who relentlessly pursues MacRay and company.

Affleck sits confidently in the director’s chair on this one, as he did in his other Boston-based directorial feat, “Gone, Baby, Gone.” Creating shoot-outs that look like savage ballets and driving his cast toward exceedingly rich performances, the “Good Will Hunting” collaborator shows us, once again, how much he loves to spin tales about “r” dropping, marginalized deadbeats from his home town.

By mirrormmg September 23, 2010
in Life and Arts
Related Posts