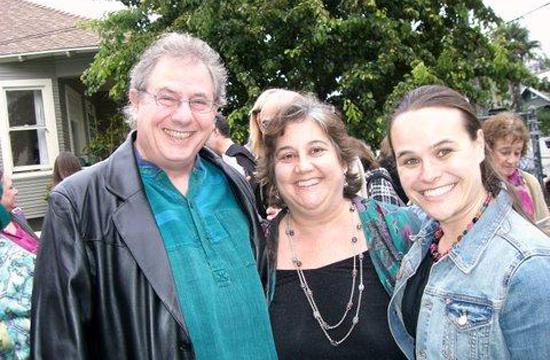 For longtime Santa Monica community members, the Communitas Awards, given by the Church in Ocean Park to community and church members who give back to their neighbors, may be the most meaningful of all awards. At the 12th annual awards dinner held September 11 at the Church, the most frequently heard comment was, “What a happy occasion this is.”

This year’s honorees were Abby Arnold, a longtime activist who has worked with many organizations; Michael Tarbet, who helped to get rent control passed in 1979 and who has since worked for tenants rights and as an organizer for SMRR; Marcia Zimmer, who was the manager of the Rent Control Board until her retirement last October; and Louise Dobbs, a Church member who recently became the Church in Ocean Park’s Minister of Music.

Poet Steve Goldman praised Dobbs in his introduction as one who “gave us-and continues to give us- the gift of song.” Dobbs, who joined the Church in 1985, was a member of the Church choir and was appointed to Graham’s position after the latter’s death last fall.

Dobbs was modest about accepting her award and praised Graham as her mentor and inspiration. But she also noted, “I love this singing community and I want to keep it going.” She concluded her acceptance with a guitar-accompanied rendition of “Under the Boardwalk.”

Abby Arnold’s honors were preceded by an original song about Arnold performed by the Lefteous Sisters with the refrain as, “Random acts of kindness are good/but organized acts of kindness are better.” In a verbal tribute, Arnold’s friend Michele Prichard said that Arnold “holds strong opinions but is also one of the most open-minded people I know.”

Arnold’s activities over the years include working with the Campaign for Economic Democracy; Santa Monica AIDS Project; CLARE Foundation; Santa Monicans Allied for Responsible Tourism; and Our House, a grief support center. Arnold became involved with Our House after the organization helped her and her sons in the wake of her husband’s death. She reminded the attendees of the importance of community. ”Miracles can happen,” she said, “when people stop thinking about themselves and share what they have.”

Marcia Zimmer was paid tribute by her friend Mary Ann Yurkonis as “someone who exemplifies this community.” Of her work for the Rent Control Board, Yurkonis said that Zimmer was “often the one who made suggestions on how the rent law could be improved.”

Zimmer joked that after she “got over the shock” of winning an award, she asked herself why it might have happened and concluded that the two reasons were her work with Rent Control and that she is “Michael’s enabler.” This drew laughter from the audience as almost everyone was aware that Zimmer and Tarbet are married.

Tarbet held up a copy of the “Ocean Park Perspective,” a monthly newspaper produced by local activists, including Tarbet, in the early 1980s. Along with school board member Ralph Mechur who introduced him, Tarbet gave the audience a synopsis of those times, when SMRR won a majority of City Council seats, when the Ocean Park Community Organization was founded, and of the way “we learned from the neighbors what they wanted.”

McKeithen summed up the mission of the awards when she said, “No one person has all the answers. But some of us have small pieces of something that might help other people.”

By mirrormmg September 14, 2010
in Life and Arts
Related Posts