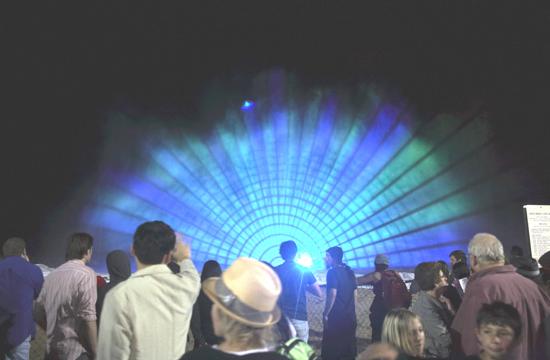 Art installations featuring glowing lights invite public participation and a sensory overload during Glow at the Santa Monica Beach Saturday, Sept. 25. The biennial event is sure to draw hundreds of thousands of visitors out to the water to experience what is being called an “artist playground.”

More than 20 installations from local and international artists will be scattered around Santa Monica Beach, the pier, and Palasades Park. The event runs all night from 7 p.m. to 3 a.m. Attractions will range from acoustic music performances to technologically advanced “interactive artworks.”

Santa Monica joins such cities as Paris, Toronto, Montreal, Rome, Brussels, Madrid, and Riga as part of a global movement producing “white night” or “nuit blanche” events. The first Glow in 2008 lured over 200,000 people beachside, exponentially more than was expected.

Glow is scaling back this year by eliminating live DJs and with shorter hours instead of ending at 7 a.m. as in years past. The earlier time an obvious transition to avoid what may be described as a “rave atmosphere.” After this summer’s Electric Daisy Carnival, a rave where a 15-year-old girl died from a alleged drug overdose and many more were hospitalized, officials in Los Angeles County have shied away from the negative association.

Nathan Birnbaum, cultural affairs supervisor for the City of Santa Monica, said the amplified music and dancing created a different atmosphere for the first Glow. This year the art is the center of the experience, he said, balancing high-tech projectors and other gear with low-tech content such as acoustic music.

This is also what can be called the “recession era” Glow, he said, with shorter hours to cut costs. Area restaurants, businesses, hotels will also stay open until 4 a.m. in an effort to attract the crowds expected to visit.

“We’d like to see a lot more looking at, participating in and discussing art,” Birnbaum said.

Radio station 89.9 KCRW music director Jason Bentley created a free podcast to accompany listeners with music and a navigation guide through the exhibits from the artists who created them. To download the podcast for the event visit kcrw.com/events/glow-santa-monica-2010.

Glow is partnering with 18th Street Art Center, Freewaves, LAND, and Machne project that will curate and commission projects for the event. The varied exhibitions will feature wandering musicians, multi-media recorded imagery, and real time video taken on location from dawn until dusk yet played in reverse.

Although free parking will be available, bicycling is highly encouraged with two free bike valets at Palisades Park between Broadway and Santa Monica Boulevard, and South Beach located at the end of Bay Street. If you do drive, many of the parking meters on the boulevards are free after 6 p.m. east of 6th Street.

Weekly updates on artists, specials and parking will be posted at www.glowsantamonica.org.

By mirrormmg September 15, 2010
in Life and Arts
Related Posts