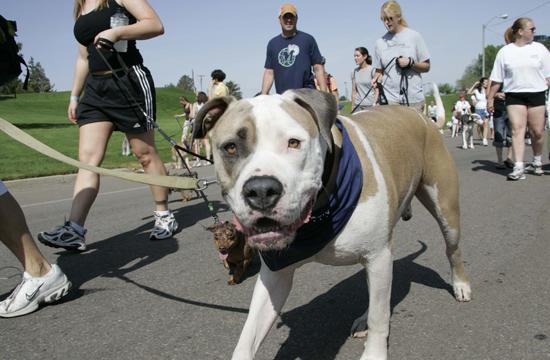 Some wore bandanas, others… studs. Most wore nothing at all. Yet they all strutted their stuff. More than 1,500 dogs and their people (1300 of them) came out for the “Strut Your Mutt” fundraiser and festival at the Santa Monica Pier sponsored by Best Friends Animal Societ..

By participating in the event, attendees, supported a world of ‘No More Homeless Pets.’ Participants were able to fundraise for one of Best Friends’ participating local groups or directly for Best Friends. Animal lovers came together to raise money for a worthy cause, celebrate their own pets, bring awareness to the community and showcase a few fabulous dogs that were looking for forever homes.

There was much anticipation as each rescue organization waited for their team to be announced. They approached the start line and off they trotted. Those not associated with a specific group could start when they were ready. Most dogs walked on their own four legs, although some had only three legs as well as a few with doggie wheelchairs. Others were carried, and some small breeds and senior dogs were carted in baby carriages or wagons. There were pure breeds, mixed breeds, tiny little Pomeranians scampering, and Great Danes plodding along.

The event and walkathon began at 8:30 a.m., with a playful one-mile walk. There was water set up for the dogs at the beginning, middle, and end of the route. The walk was followed by a dog-centric festival where pups could promenade, preen, primp, play, and partake of everything from doggy massages, puppy yoga, pet food freebies, training tips, and paw print paintings. There was also a pet communicator, teeth cleaning, and pampering at the pooch spa. Dogs and their owners participated in the pet/person look-a-like, fastest tail wag, best kiss, and best trick contests, too.

The festival included live music, entertainment, and special guest appearances. Best Friends Animal Society used the occasion to celebrate shelter dogs and the people who love them by hosting the activities to benefit participating local animal rescue groups and Best Friends programs in Los Angeles. Some of the local groups included Grey Save, Lhasa Happy Homes, Boxer Rescue LA, Downtown Dog Rescue, Border Collies in Need, even The Cat Posse, and many others.

Additionally, Best Friends had an area that showcased their work and programs, including information on how to get involved with the organization.

Best Friends Animal Society is guided by a simple philosophy: kindness to animals builds a better world for all of us. In the late 1980s, when Best Friends was in its early days, roughly 17 million dogs and cats were being killed in shelters every year. Despite the commitment of shelter workers to the animal in their care, the conventional belief was that little could be done to lower that terrible number.

Best Friends’ No More Homeless Pets campaign created a new vision: A grassroots effort to place dogs and cats who were considered “unadoptable” into good homes, and to reduce the number of unwanted pets through effective spay and neuter programs. Since then, the number of dogs and cats being destroyed in shelters has fallen to approximately 5 million a year. There has been much progress, but there is still much more to do.

The next phase of this work – bringing the number down to essentially zero – will take more work and some bold new initiatives. Shelters are crowded with pit bulls, dogs abandoned after being bought from pet stores, stray cats rounded up on the streets and not looking their very best when they’re brought in, and other pets abandoned or neglected.

As the flagship of a grassroots network of people and organizations that care about animals, Best Friends continues to lead the way towards this future. And that’s why their purpose remains: A better world through kindness to animals.

So far “Strut Your Mutt” has raised more than $200,000 in L.A. alone, which far exceeded their initial target. The next event is in NYC on Sept 26 with hopes for more around the country in 2011.

Best Friends is still accepting donations toward this event until October 1, so it’s not too late if you missed last weekends’ event. Every dollar makes a difference. For more information go to: http://bfas.org/lastrut.

Diane Rose-Solomon is a Certified Humane Education Specialist. Please visit her website Save Our Pets People and Planet www.sop3.com. Contact her at diane@smmirror.com

By mirrormmg September 22, 2010
in Life and Arts
Related Posts