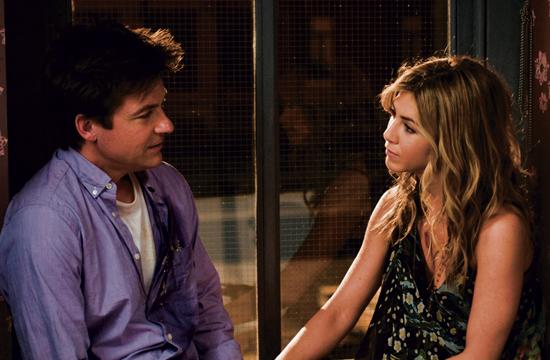 The dreaded friend zone – that cruel, big-screen dating landscape where nice guys and overweight girls go to pine and whine – is precisely where Wally (Jason Bateman) is residing at the outset of the new rom-com,“The Switch.” Allan Loeb’s (“21”) screenplay, based on a short story by Jeffrey Eugenides (“The Virgin Suicides”), doesn’t go a long way in making the movie a must-see of the genre, but the able cast members create characters for whom we care. While we’re fairly certain Wally and Kassie (Jennifer Aniston) will end up together, it’s a pleasure to watch them negotiate the union.

Kassie has banished Wally to platonic plains for several reasons, including his unwavering pessimism and neurotic tendencies. Rounding out Wally’s anti-Casanova characteristics are his wardrobe choices (lots of sweater-vests) and his lack of ambition. Needless to say, when the single, 40-year-old Kassie decides to have a baby, Wally isn’t on her mind as daddy material. Though he’s not sure Kassie should be in the baby-making market, Wally, the ever-supportive best friend, attends her pregnancy party, an actual get-together to celebrate her decision to breed sans a lifetime partner. The pivotal party guest is the sperm donor, Roland (Patrick Wilson), a dashing, sporty type whose offspring will most certainly have dazzling white teeth and heaps of go-getter energy. In a drunken, jealous act of monkey business, Wally spills Roland’s sperm and replaces it with his own seed.

The pregnancy takes and we fast-forward seven years. Kassie, who fled New York when she got pregnant, returns to the Big Apple, re-uniting with best buddy Wally.

The heart here comes mainly from the performance of Bateman, whose commitment to his character’s myriad imperfections is the stuff of great character acting. Wally’s a downer, he’s about as suave as a cloistered monk, and he has no idea how to turn on the charm or smile through small talk. But his attempts at fatherhood are genuine grabs at compassion and love for a son he doesn’t meet until the kid is nearly seven. As “Uncle Wally” and his child, Sebastian (Thomas Robinson) get to know each other, Wally’s memories of that drunken, jizz-switching night come flooding back, memories that are sparked by the kid’s unmistakable Wally-like attributes – he’s a thinker, an introvert, a brooder, a wimp, and a full-on sweetheart, just like dad.

The fact that the father-son relationship is riddled with awkward moments and parental mistakes (Sebastian gets beat up after following ill-advised instructions from Wally on how to handle bullies) is a saving grace of this evolving relationship. The mistakes ground the story in reality, conjuring up sympathy for our all-too-human hero.

Jeff Goldblum and Juliette Lewis play best friends to the central couple, putting in performances that add sparkle to the sometimes-shaky love story. Directors Josh Gordon and Will Speck keep things moving toward compassion and humanity, reminding us throughout that love isn’t just for the beautiful, the best, and the brightest – it’s also for the bumblers and the boorish.

By mirrormmg September 19, 2010
in Life and Arts
Related Posts