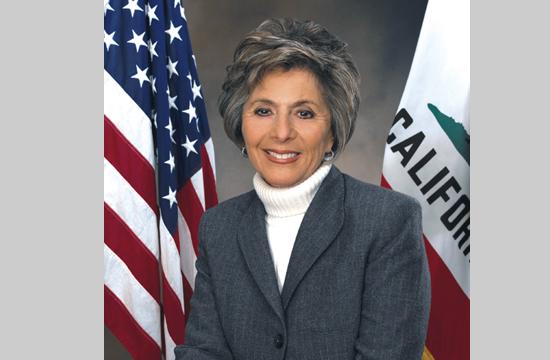 Barbara Boxer stood at a makeshift podium in the sand at Santa Monica Beach this past Saturday. Santa Monica Mayor Bobby Shriver stood by her side, along with City Council member Bob Holbrook, Assemblywoman Julia Brownley, actors Hector Elizondo and Valerie Harper, small business owner Richard Chacker, and Sierra Club Western Director Bill Cocoran. Behind them, the blue of the Pacific sparkled in the California sun.

Sen. Boxer talked about her mother’s reverence for voting and about being a little girl and going with her mother into the voting booth. “She’d take me by the hand and we’d go to vote. She would pull the black curtain around the booth. It was so exciting and mysterious and my mother said, ‘Honey, this is what it means to be an American. You have a vote and it’s private.’ And then my mother made a little joke and said, ‘So don’t even tell Daddy how I voted.’

“When my mother passed away I found her citizenship papers and I knew it was a message from my mother about how important it was to her to be an American.”

In startling contrast, Scripps News, in an August 2009 story asks if Senator Boxer’s opponent, Republican Carly Fiorina, “passes the Citizenship 101 test? Fiorina, has a spotty California voting record and never cast a ballot in two other states where she lived, according to public records.” In June 2009, the San Francisco Chronicle reported that “Fiorina had voted in just five of 18 national, state, and local elections in which she was eligible to cast a ballot since she registered in Santa Clara County in 2000, according to public records.”

Barbara Boxer not only votes, she leads. Her understanding of the issues was essential to her endorsement by the Editorial Board of the LA Times, “for values promoted by this editorial page: individual rights, equality, environmental protection, and constructive engagement by the federal government with national economic problems, including the crisis in healthcare.”

Her opponent has commented on Boxer’s hair, saying it is “so yesterday.”

Boxer says, “It is [Fiorina’s] policies that are ‘so yesterday.’ My opponent says she wants to drill. We went back through the decades to find the last United States Senator, either Democratic or Republican who wanted to drill off our coast. It takes you back to the ‘80s and S.I. Hayakawa. My opponent wants to repeal the ban on assault weapons. The assault weapons ban was passed by the State of California in the ‘80s.”

Pointing at our beautiful beach Boxer said, “From Humboldt Bay to San Diego, ocean-related tourism, recreation, and fishing generates a $23 billion economy for California every year and 400,000 jobs. So if anybody, any candidate for office says to you that they are for jobs, but yet they are for drilling off our coast, they have launched an attack on 400,000 jobs. They have launched an attack on our health.

“You know what, I want to see the words ‘Made in America’ again, don’t you? My opponent wants to keep the tax breaks for companies that ship jobs overseas just as she did at HP. I want to see clean energy technologies made in America, for America, exported all over the world. And I want to say goodbye to those countries that don’t like us that are taking a billion dollars a day for oil.

Boxer also has another quality, the quality of compassion. Boxer told a story of a letter she received from a 91 year old Californian, enclosed was a check for $25, saying this was the last check she could send this year. She wanted Boxer to know she was praying for her and for the President. Her address and phone number were under her signature. Boxer called her back to thank her and told her to watch the new TV ads as she thought they would make her feel good. The woman told her she had an ‘80’s Zenith TV that had stopped working. Barbara sent her a new TV.

Issues matter. Compassion matters. Barbara Boxer has earned our trust and our respect with her principled leadership on behalf of California. Barbara Boxer, my candidate for U.S. Senate, and I hope, your candidate as well.