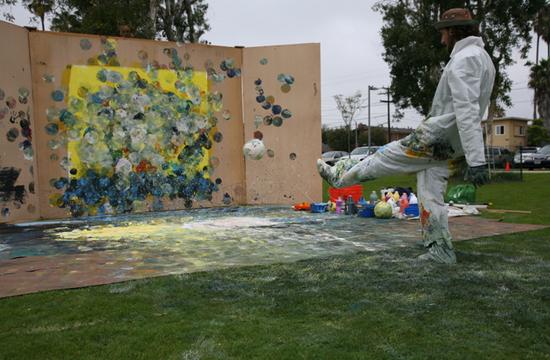 In 2006 the Pico Improvement Organization (PIO) created the Pico Festival, in order to showcase the hidden gems that line the boulevard. The fifth edition of the Pico Festival on October 16 featured 40 shops, businesses, and other places of interest along Pico from Main Street to Centinela and was in support of Project Lemon-Aid, raising funds for the Santa Monica-Malibu Education Foundation “For the Arts” program.

Shops, restaurants, and galleries held open house with refreshments and sidewalk displays. Passers-by could drop into places they might not have noticed while driving by, such as Caprice Fine French Pastries (3213 Pico) where one could watch the cooks and bakers preparing tarts and cookies, Gilbert’s El Indio Mexican Restaurant (2526 Pico) where a long line of customers waited for tables, or UnUrban Coffeehouse (3301 Pico) where children drew chalk art on the sidewalk outside.

Santa Monica College (1900 Pico) opened its Art Building for visitors to see students at work. Joan Klotz, an SMC alumna, told the Mirror she continues to take classes and is currently learning ceramics. As she spun a lump of brown clay on her potter’s wheel, she noted: “I love to make functional ceramics. It’s great to have cereal out of a bowl you made.”

In another room, students performed the delicate art of glassblowing, spinning wads of liquid glass into multi-colored vases and jars while observers stood close but not too close due to the intense heat of the furnaces.

The Classic Car Show at SGI-USA’s lot at 2601 Pico displayed vintage cars including 1950s Impala and Ford Galaxie convertibles and a 1946 Ford “Woodie,” a large maplewood-trimmed car used for transporting surfboards. “It was restored seven or eight years ago, has a V-8 engine with 100 horsepower, and gets more ‘smiles to the gallon than you can imagine,’ ” said Dougger, who owns the vintage vehicle with his wife Peggy.

The car show also featured a silent auction of jewelry, clothes, and other items to benefit the Cody Williams Recovery Fund. Williams, the Samohi footballer who is recovering from injuries sustained in the season-opening game of 2009-2010, was present at the show, talking to well-wishers and expressing his appreciation for all the support being shown him. Asked what vintage car was his favorite, Williams smiled and said “I don’t know-I kinda like them all.”

The Festival’s focal point was Virginia Avenue Park. Booths displayed and sold work by local artists and food from Farmers Choice (3250 Pico) and Trader Joe’s (3212 Pico). Kids carved small pumpkins courtesy of Farmers Choice and participated in art projects. Food stands gave off a tempting barbeque fragrance as they sold goodies prepared by Upper West (3321 Pico), and gave out free hot dogs. Among the entertainers on the park’s stage was the Santa Monica High School Jazz Band. These six young men, on guitar, bass, trumpet, sax, keyboard, and drums, sounded like a group of seasoned professionals as they performed classics by Miles Davis and Herbie Hancock.

For those who didn’t want to walk along Pico Boulevard (it was drizzling at times), StarLine double-decker tour buses traveled the length of the street, giving free “shuttle” service to festival attendees. This reporter ended her Pico Festival experience by riding home on the upper deck of a StarLine bus. The view of Pico Boulevard from up there was a panorama of architecture, shops, and typical Santa Monica scenery.

By mirrormmg October 18, 2010
in Life and Arts
Related Posts