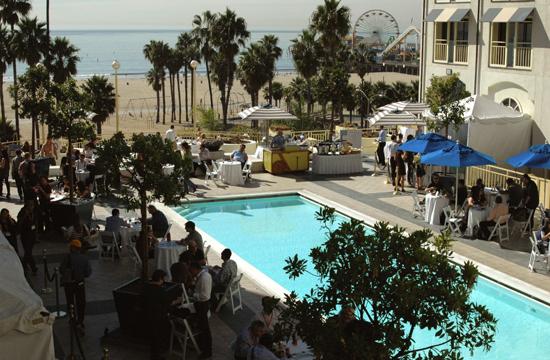 Each year thousands of independent filmmakers strive to gain financing and distribution for movies made with relative unknown actors on a shoestring budget. Each year filmmakers from all over the world herd to American Film Market to screen independent films. This market can mean the difference between a straight to DVD release or a blockbuster hit.

Summer Sinclair knows both sides of the gamut having worked in the past on films looking for financing at the festival and this round she promoted a film that has the promise of a wide-screen release. Sinclair, a burgeoning actress and independent filmmaker, appeared in the feature film “The Last Gamble,” starring Steven Bauer, best known for his work in the cult classic, Scarface.

“It’s the premiere place in the U.S., especially for independent filmmakers to sell their film,” Sinclair said of the American Film Market in Santa Monica.

The fate of “The Last Gamble” is up to the distributor, rumored to have sold to the same distributor as the award-winning “Crash,” which may attempt the typical avenue of showing by limited-release in theaters to gain popularity or take a different approach to find success in the film market.

Sinclair, who got her start in theater while growing up in Oregon, explained that independent movies can get aired and cause buzz in multiple avenues, including the emerging field of streaming Internet companies. She has been shopping to find funding after screening her intriguing short film “Now or Never” in the festival circuit, including Cannes Independent and for the upcoming Valley Film Festival on Nov. 14, which features movies from the 818 area code.

The purpose of AFM is this is where filmmakers go to sell films, and there are a lot of people networking and vying to get their films out. The market attracted more than 8,000 industry professionals to Santa Monica for eight days of deal-making, screenings, seminars, premieres, and of course, parties. Screenings filled very theater in Santa Monica each day.

AFM is the less showy counterpart to the American Film Institute Fest, which ran during the same weekend in Hollywood. AFI is on par with the sheer draw of the Cannes or Sundance film festivals, with the glitz of the red carpet and big studio films touting top actor names. AFI premiered the studio film “Love and Other Drugs,” starring Anne Hathaway and Jake Gyllenhaal, for opening night.

For AFM, both Loews and the JW Marriot Santa Monica Le Merigot converted into busy marketplaces filing each room with entertainment companies touting films, television series, and global opportunities. This is the 20th year Santa Monica has hosted the event. The festivities started Wednesday, Nov. 3 and ended Nov. 10, boasting an estimated more than $800 million in deals sealed.

This year featured 409 motion pictures, including 49 world premieres and 287 market premieres, as well as 20 films in 3D. This is a free-for-all of movie deals, but only for those that can grab it. Growing pressure for studios to pick big hits has been amplified as ticket sales are down, and competition from independent films thanks to online sources is going up.

Incentives to film overseas and out of state are drawing more production out of Los Angeles, a major shift for the traditional economy of tinsel town. While industry reps networked in Loews’ lobby, locations such as Mexico, Rio de Janeiro, Fiji, and Turkey all had booths enticing filmmakers to venture out to make movie magic.

Locations offer tax incentives where the state or country will subsidize direct costs in order to allure the coveted industry. Detroit offers up to 42 percent tax incentive while competing with neighbor Quebec that boasts up to a 44 percent cash rebate. Major blockbusters such as Transformers as well as independent, low-budget films are filming out in areas such as the Yukon to extend funding as far as possible.

One filmmaker explained how filming in Michigan versus Canada allowed long-time friends and U.S. team members to work on the production crew that would otherwise be restricted due to local labor requirements in Canada. Incentives are largely geared toward hiring a local, labor force.

Getting the Word Out

Once a company agrees a buy an independent movie, then its time to distribute the film to make a profit. No longer are companies banking on blockbuster theatrical sales, instead DVD, streaming Internet, domestic TV, and foreign distribution sales are all profit avenues for modern movies.

Bigfoot Entertainment, an international financing and distribution company, premiered their new headquarters during the AFM festival inviting attendees and industry reps to the Abbot Kinney Boulevard lot. Guests enjoyed a live DJ, sushi, and Polynesian foods, as well as drinks provided in part by O.N.E. coconut water. Promotional ads for films distributed by Bigfoot aired on TVs throughout the grounds.

The company announced during the party a new domestic distribution and foreign sales division named, Bigfoot Ascendant Distribution, Inc. thanks to the acquisition of Ascendant Pictures this year. The group now possesses more domestic films with well-known U.S. actors, if not blockbuster sales.

“We aren’t looking to compete with the big studio distributors. We’re simply filling the void of mid-level opportunities that we’ve seen while on the other side of the fence,” said Bigfoot CEO Kacy Andrews.

After a weekend of schmoozing and finance deals, the fate of the film industry appears to be well and thriving, if not churning with new opportunities. For studios and independents alike, AFM means a shot at the momentary sigh of relief, and perhaps the reward of a big sale and a brighter future.

For actress and filmmaker Summer Sinclair the independent film route has treated her well. Working on a hit webseries or guest staring on the Bold and the Beautiful, she shows no indication of slowing down.

“This whole year has kind of been festivals, and now if ‘Last Gamble’ gets sold at AFM, that will really just seal that whole festival year,” Sinclair said. That is at least until the next festival, and the next big sale.

By mirrormmg November 11, 2010
in Life and Arts
Related Posts