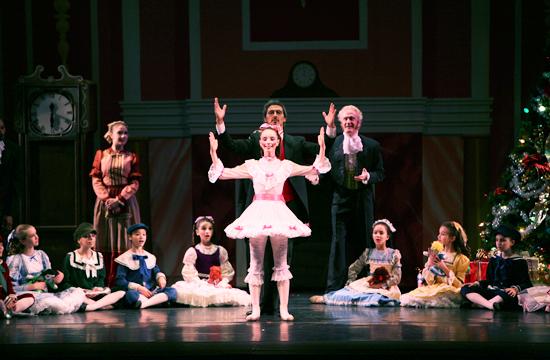 At the self-proclaimed “terribly old” age of 91, Yvonne Mounsey has directed the Westside Ballet of Santa Monica’s Nutcracker production in true, traditional form for 39 years and counting. She finds ballet to be a “marvelous” discipline for any young child to partake in, albeit a “cruel lot” that allows very few to join the major ranks.

The South African-born dancer joined her first ballet company at the age of 18, destined for a European tour with the renowned Ballet Russe de Monte Carlo. While preparing in Paris, war broke out, it was 1939 and the troupe was left stranded at the launch of World War II.

“War changed my whole ballet life,” she said. “Maybe for the best, I don’t know.”

Forced back to South Africa, she then left by boat for Australia to join Colonel W. de Basil’s Original Ballet Russe, and then off to Cuba, and finally New York City. In 1959, she joined the troupe of the rising ballet visionary, George Balanchine. He formed the New York City Ballet with Mounsey there from the beginning staying 10 years with a roster of legendary dancers.

“I was always in the right place and right time,” Mounsey said, staying with the company nearly 10 years before it became time to retire. In 1960, she went on to co-found the Johannesburg City Ballet, now PACT Ballet Company, a crowning achievement of her career. She came to Los Angeles with her late-husband Kelvin Klegg and daughter in 1967.

That same year she formed the Westside Ballet of Santa Monica, a nonprofit organization, and its sister branch, the Westside School of Ballet. The school boasts almost 100 student dancers ranging from 8- to 18-years-old. Every student participates in the company’s Nutcracker production, the first of two performances the company generates each year.

For the last 39 years, Mounsey and company prepare for the annual performance scouting for one of the ballet’s most prominent roles, the sugar plum fairy, looking to both students and alumni. Alumna Melissa Barak, who started at Westside at age 8, will perform the role of sugar plum fairy Dec. 11 and 12. Barak danced as soloist with New York City ballet for 9 years, and later joined Los Angeles Ballet. Alumni of Westside School of Ballet dance with many professional companies, including San Francisco Ballet, New York City Ballet, and American Ballet Theater.

Westside’s Nutcracker is the traditional full-length ballet, from the Victorian-style party scene to the glittering Sugar Plum Fairy. From the moment the lights dim, the audience is transported to a magical world filled with peppermint candy and dancing snowflakes, set to Tchaikovsky’s majestic score. Mounsey added numbers in the second act to allow some of the school’s younger members to participate during the act’s overture.

“The classics should remain the classics,” Mounsey said, explaining the Westside production is based on William Christenson’s Nutcracker staged in San Francisco starting in 1944. His ballet brought the first production of Tchaichovsky’s Nutcracker, which originated in Russia, to the U.S., establishing a now standard holiday tradition. Balanchine is said to have worked with Christenson to develop the ballet, although Mounsey is quick to differentiate the styles.

“When [Balanchine] came to America, he revolutionized ballet,” Mounsey said. “I remember him saying, ‘It’s jet planes and skyscrapers,’ he made it more exciting. It’s really advanced from the original Russian ballet.”

By mirrormmg November 30, 2010
in Life and Arts
Related Posts