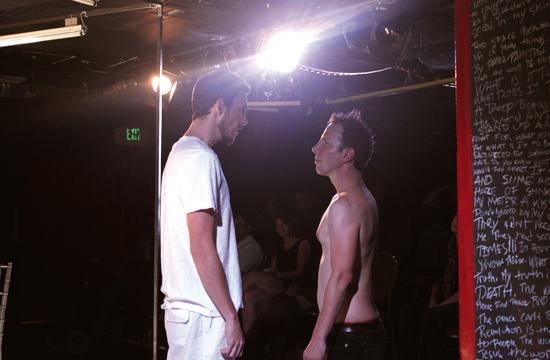 Jeremy Alum’s adaptation of “The Last Days of Judas Iscariot” covers all things biblical, but expands to encompass some of the pure wonder of life. From the biblical approach of purgatory, to what some believe is the greatest crime a human has ever committed (the betrayal of Jesus Christ), this performance runs the gamut of thought-provoking elements.

“This play is about humanity. It’s the exact reason I do theater,” said director Alum. “It tells us that we are all the same and need to accept each others flaws.”

One strong issue addressed in the wide range of themes, is that of brotherhood and forgiveness. Alum, following the footsteps of Phillip Seymour Hoffman (who directed the original, off-Broadway production) takes a bold approach in letting you decided what’s fact and fiction – what’s real and not – much like our choice in spiritual beliefs.

In the performance, you as the audience get to see firsthand testimonials of some of the most prominent figures in the history of religion and spirituality. From the Apostles’ point of views, to Saint Monica (played by the very talented Lowam Eyasu), to Mother Theresa (the charming Fayna Sanchez, who normally plays the Archangel but stood in to play the famed saint in this performance) or even Satan himself (the sneaky and bold talent of Levi Sochet) – they all have a unique point of view used to dissect the case of Judas. Pontius Pilate (played strongly by the handsome Paul Tully) even takes the stand and tells his side of the story. As does Judas’ Mother (Michelle Mania) and the Great Sanhedrin Caiaphas (Adam Tsekhman). Even Sigmund Freud (Amire Levi) has an opinion on the matter (surprise), to promote a “Judas was Mental approach” – one of the many parallels to a modern day court trail.

For those who have ever been a juror, every approach that has ever been heard in a courtroom – is presented in this play. The Defendant Lawyer (played by the powerful Jessica Culciati) who tries to retrace the steps of a great Iscariot’s childhood, is the same one who tries to present an insanity approach to win the case for the defendant. Pontius Pilate himself masterfully executes the “Spin Doctor” technique, as every time someone tries to discredit him, he puts a positive spin on it (much like a politician). When confronted with, “You were so convinced that you did nothing wrong, yet, out of the 700 crucifixions you were responsible for, Jesus Christ was the only one you washed your hands of.” Pontius smoothly replied, “My crucifixion rate was down 70 percent from my Predecessor.”

“Pontius was in a tough predicament and a tough spot,” tells Tully after the show. “Pontius and Judas are very similar to man now days… No one ever looks at their point of view.”

Every source of dramatic entertainment is seen in this performance – from movie format to classic stage theater. There is comic relief too, delivered with the on-queue quirkiness of Nick Mills, whose character El-Fayoumy supplies humor that you have to see to truly appreciate. He gravels at Mother Theresa’s feet, backs down against Satan, and even goes as far as to hit on the defense attorney.

Now keep in mind, the entire play takes place in Purgatory. “The concept that we can blame the heavens for our problems, but ultimately it is our free will that gets us where we are – be it a place of forgiveness or a place of damnation is what this play is all about,” said avid theatre-goer Nichole Joor, who was also attending the preview night.

“We are all from different backgrounds, and we all have different ideas, morals, and what not… Judas could of easily have saved himself if he allowed himself to love as Jesus and forgive like Jesus,” said Sanchez (Mother Theresa, Archangel), “Just like the people in the world today, we have to learn how to forgive ourselves. Religion is narrow minded, and theatre is meant to be though provoking.”

Thought provoking is exactly what “Last Days of Judas Iscariot” accomplishes. With its witted humor, modern-day parallelisms, to astonishing-jaw- dropping, never-be-forgotten last scene, this is one play you don’t want to miss during its limited Los Angeles run. In a perfect world, every director’s dream is to win the favor of the critics, and the audience. Alum has done just that, as he has directed an amazing and talented cast.

By mirrormmg November 30, 2010
in Life and Arts
Related Posts