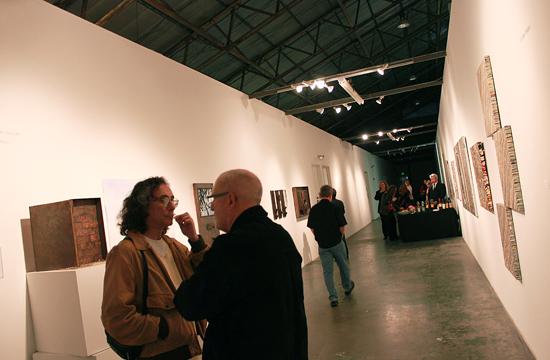 On Dec. 11 the Sherry Frumkin Gallery held a typical art reception. The small gallery and the hallway outside featured Linda Ekstrom’s multi-textured works and wood and metal pieces by Giuseppe de Pero. Visitors nibbled refreshments, danced to a DJ, and chatted with each other and with owner-curator Sherry Frumkin.

But this reception was a closing party. After 20 years at three locations, Frumkin is leaving the space at Santa Monica Studios.

The Sherry Frumkin Gallery has occupied a corner of Santa Monica Studios, 2400 square feet of space inside a 22,000 square foot former hangar. The remaining space is occupied by Arena 1 Gallery, which features cutting edge work and international curators, and by 30 artists’ studios.

Frumkin’s gallery showcased artists from all over the world, with both emerging artists and names like Robbie Conal, Bruria Finkel, and Leonard Peltier.

“I started the gallery in 1990 and the first location was on Ninth Street in Santa Monica. It was brand-new construction,” said Frumkin. “I got a chance to build it out and do it how I wanted.” When the 1994 earthquake left that location badly damaged, Frumkin was able to obtain space at the newly created Bergamot Station and it became her gallery’s home for the next eight years.

“Then I had the opportunity to partner with Yossi Govrin in creating the Santa Monica Art Studios at the airport. So I moved the gallery to its current location and I’ve been there six years.”

Frumkin’s decision to close the gallery is not the result of the recession but rather a personal decision that she made because she wants to devote more time to the art studio and to curating shows at other galleries.

“I’m in contact with so many artists and I really have a sense of what they need. I think that there‘s a way that I can work with artists that’s a little bit different than having a gallery space.”

Asked about what artists and shows seemed to have the most impact for her over the years, Frumkin noted that she had come from a “really political point of view.” She combined her interest in political issues and her love of art with “political shows that were very feminist in nature. And I was also really delighted to be kind of a pioneer in showing Chinese art before it became so popular.”

Giuseppe de Pero, who had the next to last show featured at Sherry Frumkin Gallery, was present at the closing. His exhibit included “Between the Cracks,” a mysterious wooden box with video and photos visible through a tiny crack. This work was part of a “narrative” that connected it to other works in the same display.

A practicing artist for 20 years, de Pero said Frumkin’s was “the first gallery I ever walked into” and he had simply contacted Frumkin to get his first show. “I quite showing 12 years ago [but] she enticed me into showing again this year.”

Another artist at the closing was Doni Silver Simons, who had visitors stand against a whitewashed wall of the gallery where she marked their heights with a pen and had each person sign where their mark was.

“It was her goodbye performance,” said Frumkin. “What she told me when she proposed it was, that when someone’s ready to go out into the world and take the next step, you mark the passage where they’ve grown, to capture everyone at their present height.”

Simons will be taking over Frumkin’s gallery space. The piece of wall where the heights of the visitors were marked will be removed and preserved. And Sherry Frumkin will still be a part of the local art world. As her closing announcement said “One door closes; another door opens.”

By mirrormmg December 12, 2010
in Life and Arts
Related Posts