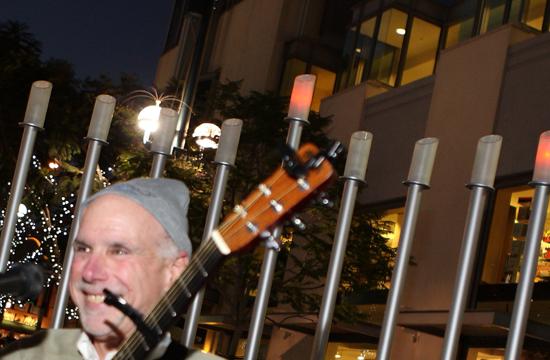 Whether you spell it Hanukkah or Chanukah, by any name it is the Festival of Lights, a Jewish holiday that occurs in the Hebrew month of Kislev and lasts for eight days, beginning, as with all Jewish holidays, on the evening before the first day.

The holiday commemorates the victory of the Maccabees in Judea over Syrian troops and the rededication of the Temple in Jerusalem in the second century B.C.E. According to legend, there was only enough consecrated olive oil to fuel the eternal flame in the Temple for one day. Miraculously, the oil burned for eight days.

To commerate this miracle, at sunset each day of the holiday, Jewish families light the Menorah, a candlelabra with eight branches plus a central branch known as the “shammus” to hold the candle that is lit first and is then used to light the other candles.

Hanukkah traditions involve prayers, songs, foods cooked in oil, especially latkes or potato pancakes, fritters, and donuts, and for the kids, the spinning of dreidels (tops) and gifts of “Hanukkah gelt” (small coins, usually made from chocolate wrapped in gold foil).

The website www.jewfaq.org notes that “Chanukkah is probably one of the best known Jewish holidays, not because of any great religious significance, but because of its proximity to Christmas.” While the holiday always begins on the 25th of Kislev, the months of the lunar-based Hebrew calendar don’t correspond to the months of the Gregorian calendar. Therefore, Hanukkah falls at different times every year but usually occurs some time in December, which has led to its inclusion in the “holiday season.”

Many Jewish-American families give children presents, but the giving of gifts is not part of Hanukkah tradition.

If you do want to give a gift, one suggestion would be the “Fizztival of Lights” gift box at Lush (1404 Third Street Promenade). The $19.95 box is wrapped in blue paper (blue and white are Hanukkah colors) and holds four of Lush’s fizzy “bath bombs” that fragrantly dissolve in the tub.

You can make your own latkes from numerous recipes available in cookbooks and online or stop in at Izzy’s Deli (1433 Wilshire Boulevard) for latkes with sour cream and apple sauce. These are large, crispy, very satisfying latkes, in this reporter’s opinion.

According to Jaime, manager at Izzy’s, the first night of Hanukkah on Dec. 1 was “very busy,” with customers getting take-out latkes, brisket, matzo ball soup, and other goodies.

Most traditional Hanukkah songs (sung in Hebrew) are not known to Gentiles. But beyond the overly familiar children’s “Dreidel Song,” there are many fun choices to download. YouTube is featuring Jewish reggae artist Matisyahu and Sesame Street’s “Hanukkah with Veronica Monica.” Other faves are Adam Sandler’s various versions of the name-dropping “Hanukkah Song,” and the parody “Hanukkah Hey Ya,” available in several versions.

This year, Santa Monica’s outdoor Menorah is located at the 1200 block of Third Street Promenade, with the local Reconstructionist Temple Kehillat Ma’arav performing the ceremony. The old-style oil-burning Menorah of Chabad is located at the other end of the Promenade and Chabad, an orthodox Jewish organization, is doing their own lighting ceremony also.

At the December 2 lighting (second night), Rabbi Jonathan Hanish and the other rabbis of Kehillat Ma’arav sang Hanukkah songs and prayers as they “lit” the electric Menorah’s shammus and two lights on the side.

By mirrormmg December 7, 2010
in Life and Arts
Related Posts