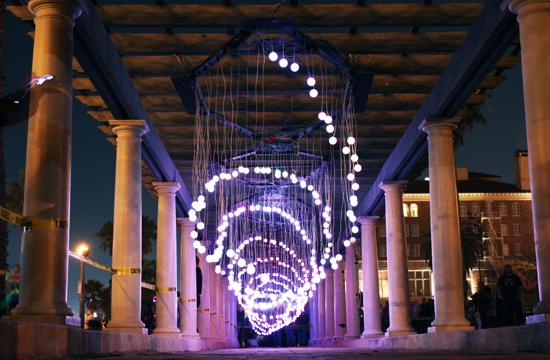 Santa Monica is a city rich with cultural happenings. There are concerts, art shows and other events going on every week. But there were ten particularly noteworthy events this year that we felt warranted recognition for their outstanding significance to the Santa Monica arts culture.

The second GLOW event (the first was in 2008), held on Santa Monica Beach Sep. 25, attracted one hundred thousand people to enjoy art, performances, and exceptionally balmy evening beach weather. The event was inspired by a similar happening in France, Paris’ Nuit Blanche, and at the opening ceremony Los Angeles French Consul General David Martinon, said, “Santa Monica has been transformed into a work of art by these incredible transformations. Nuit Blanche in English means white night or any night that you don’t sleep at all.”

Sleepless or not, people had a more relaxed time at this GLOW than in 2008, when the all-night event became overcrowded. This GLOW went from 7 p.m. to 3 a.m. and except for a brief closure of the Pier due to crowding around midnight, there was a peaceful and celebratory vibe as people looked at the art, watched performances, and walked barefoot in the sand.

On Dec. 14, the City Council approved the sale of Pacific Park to CNL Income Partners, LLP, for $34 million.

Santa Monica Amusements (SMA), LLC will continue to operate Pacific Park as a subtenant with the current management team. The Santa Monica Pier Restoration Corporation Board gave approval to the sale and lease agreement as it was consistent with their guidelines.

The two–acre amusement park has always offered free admission and no change to that policy has been announced. Interestingly, there was no public comment on the sale at the Council meeting.

It looked dire at first for the free summer concert series at Santa Monica Pier that has delighted audiences for more than 20 years. Although the City Council approved a matching grant of $35,000 and the Pier Restoration Corporation (PRC) raised monies in excess of that amount to match, initially there was still not enough money to put on the shows. The funds were finally secured by an increase in the fees for the Pier Carousel and then PRC Director Ben-Franz-Knight’s search for a partnership that resulted in the participation of Bayside District Corporation.

The Twilight Dance Series for 2010 featured eight concerts on Thursday evenings from July 8 to Sep. 2. Among the highlights were Ricki Lee Jones, performing with gusto on a cool and foggy evening, and Dr. John serving up New Orleans musical fun at the last concert on Sep. 2. According to Anne Railsback of the PRC, concert attendance was 100,000 for the entire summer.

Franz-Knight also announced at the final concert that he was leaving Santa Monica to accept a position in Seattle.

After months of negotiations and City Council discussions, the possibility that the Broad Museum would be built in Santa Monica was dashed when Eli Broad announced in August that he had accepted the bid of Los Angeles to build the museum in downtown Los Angeles.

The City Council had examined and agreed in principal to build the museum on 2.5 acres near the Civic Center and City Hall, which would have put the museum near the eventual Expo Light Rail terminus and newly-opened Santa Monica Place mall.

Broad had campaigned for years for a Santa Monica site for the museum, as Broad Art Foundation headquarters are at 3355 Barnard Way. The Foundation will now be moving to the downtown site once the building is finished.

Although Santa Monica ended up not getting a big museum this year (see No. 4 on this list), it gained one with the opening of the History Museum’s permanent home at 1350 Seventh Street on Oct. 24. A longtime project of the late Bob Gabriel and Louise Gabriel, the museum was established in 1988 and existed in four different locations. It had been hoped that the History Museum would be part of the new Main Library when that building opened in 2006. But it took some time to find funding, which was finally contributed by the Bourget Brothers. In the words of Lenard Bourget, the contribution leaves a “permanent legacy for Bourget Brothers and is also a way to give to the community.”

The museum’s center contains a timeline consisting of four exhibits; The Town In The Headlines, A Town At Work, A Town At Play, A Town In The Arts, and Then and Now. Also part of the museum are paintings and other possessions from the City of Santa Monica’s co-founders Senator John. P. Jones and Robert F. Baker.

6) Campaign to Save School Music Programs

In March the Santa Monica School Board approved the layoff of 61 employees. Ten of these positions were to be those of music teachers at the elementary school level.

The Board received more than 300 letters protesting the planned layoffs. Community members concerned about the overall school layoffs and the loss of arts and music programs in particular, urged voters to pass Measure A, a parcel tax measure that would ensure funds to the schools. When this measure failed to pass, the Save Our Schools (SOS) campaign was launched by the Santa Monica Education Foundation.

With the goals of raising money to fund for elementary class size reduction, lower secondary class sizes, and the restoration of music, library, and counseling programs for the next school year, SOS rallied Santa Monicans (and Malibu residents) to donate via live auctions, a book fair on the Third Street Promenade sponsored by Barnes and Noble, a concert by Pat Benatar and Neil Giraldo, and collections at the Twilight Dance Series concerts.

By Aug. 1, the one million mark was reached, enough to restore 12 of the positions lost. By the Aug. 15 deadline, $1.5 million had been raised and with the help of extra one-time federal funding, the Board was able to restore a number of positions and programs including a total of 8.25 elementary music, library, and counseling positions, and 2.5 full-time employees for high school music education programs. Additional federal funding was used to restore a total of four positions that had been eliminated last year.

The fourth annual Art for CLARE benefit was held June 13 at Bergamot Station and attracted an audience of more than 200 people. Proceeds from art sales went to the CLARE program, which provides services to those in recovery from alcohol and drug abuse.

More than 60 artists, including Ed Ruscha, Billy Al Bengston, Joe Goode, Alex Couwenberg, Kim McCarty, Jeff Bridges (courtesy of the Rose Gallery), and Anthony Hopkins, provided the art work that was for sale, and some of the artists-Jay Kelly, Jeremy Kidd, Yvette Gellis, Max Miceli, and Tommy Hollenstein-were there in person, as was actress Meredith Baxter, who was cop-chair with Linde Caughey. Music was provided by violinist Chris Murphy and refreshments were donated by restaurants ranging from El Cholo to Urth Café.

Caughey said that although the recession had some impact on attendance and art sales she looked at the returning venders and artists as well as those who were new this year as evidence of the event’s success. “Everybody has come back,” she said, “so we must be doing something right.”

With a 30-year history, The Crossroads School is one of the nation’s leading college preparatory schools and has a notable arts program. Virtually all of its graduates go on to college.

Bob Riddle, Crossroads Head of School, told the Mirror: “One of Crossroads’ founding commitments is to the arts. We believe that the arts are an essential part of the curriculum and that it is important for students to express themselves creatively and to use their imaginations freely.”

Santa Monica residents like to read. With the cost of books possibly too pricey during a recession, local readers have fallen back on the City’s library system, which has shown considerable growth since the opening of the new Main Library in 2006.

With events and services that include computers for visitor use, study areas, a secondhand bookstore, film screenings, staged play readings, guest speakers, book signings, health lectures, and children’s activities, the four Santa Monica Branch libraries provided a wealth of cultural activity, all of it free, during 2010.

Many citizens also participated in the Citywide Reads program, which in 2010 featured the novel “Little Bee” by Chris Cleave. Events connected to the program included an appearance by Chris Cleave at the Main Library, with actors reading an excerpt from the book.

Residents also met several times to discuss the City’s plan for a fifth branch library in Virginia Park, to serve the Pico Neighborhood.

Started in 2006 by the Pico Improvement Organization (PIO), this daylong street festival’s 2010 edition was one of the busiest and most diverse outdoor events of the year, despite drizzly weather. While the festival showcased local businesses and non-profit organizations, it also emphasized the cultural life of the Pico neighborhood.

Santa Monica College provided some of the art showcases, with exhibits of student art as well as an open house at the campus art complex, where one could watch glassblowers and potters at work.

A classic car show provided a kind of “readymade” art with its display of cars, including the winner, a large maplewood-trimmed Ford “Woodie” used for transporting surfboards.

Art was also on display at some of the retail businesses and at Virginia Avenue Park, where an artist made paintings by kicking a soccer ball covered with paint onto a large canvas on the grass.

Also at the Park, entertainment was provided by music acts such as the Santa Monica High School Jazz Band, who sounded like a group of seasoned professionals as they performed classics by Miles Davis and Herbie Hancock.

As a vibrant city by the sea, there were many cultural events that happened in 2010 that didn’t make this list. If you disagree with the ones we chose, let us know! We’re open to arguments suggesting alternatives. Sound off in the comments section below.

By mirrormmg December 26, 2010
in Life and Arts
Related Posts