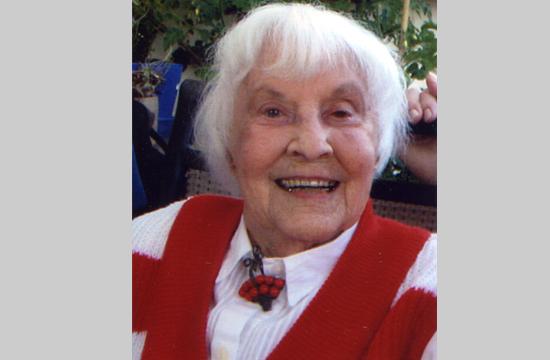 Long-time Santa Monica resident Fauna Kane celebrated her 100th birthday this week surrounded by her family and friends. “I have had a miracle life,” she said. “I think I had almost a perfect life.”

Fauna, a petite woman dressed in pink shoes, socks, slacks, sweater, and pin, said she has no aches or pains and always has the ability to be happy. She reads the newspaper daily and keeps busy visiting with friends and family. Blowing out the candles on her 100th birthday cake, she may well be a role model for a new centenarian age. Some estimates project the U.S. centenarian population will double every decade.

Having lived through two world wars, the great depression, and the end of a millenium, Fauna has benefited from her can-do attitude, resolute optimism, and appreciation for the people in her life. “She’s tough as nails, and equally soft,” said her great-nephew Chris Deleau.

Fauna Maine was born Jan. 11, 1911 in Murray, Neb. and grew up on a homestead farm in Otis, Colo., where the sandy soil was barren and the family lived in challenging conditions. She graduated from Otis High School in 1930, months after the stock market crash of October 1929.

She attended beauty school in Denver, where she learned a profession that would prove to serve her well. “It was a time when women didn’t get good jobs because of the depression,” Fauna recalled. “One of my aunts thought it would be a good idea for me to go to beauty school. It was an excellent idea, because I enjoyed it, I could get a job, and I could buy a business.”

The onset of World War II drew Fauna and her husband, Forrest Brouhard, to Santa Monica, where Forrest worked training pilots. Like thousands of other transplants, Fauna’s parents and family also migrated west to work at Douglas Aircraft Company, which was founded in Santa Monica and profited from the need for military aircraft. The field and area where Douglas operated is today the Santa Monica Airport.

Fauna’s husband arrived first in California and rented a large home in West Los Angeles where the extended family lived together for a while. “Everyone had their own bedroom,” she recalls. “There was only one bathroom but it didn’t matter because we all went to work at different times.”

Fauna and Forrest built a home on Stanford Street in Santa Monica and lived there for 55 years. They bought several apartment buildings, and Fauna started a successful business, the Los Montana beauty salon on Montana Avenue near 26th Street, one of few salons in the neighborhood. She grew the small salon into a busy four-operator shop and ran it for 12 years.

“It was a wonderful time. Every day we went to work it was like going to a party. We were very, very popular because there were not many beauty shops in the area. Sometimes we worked from 7 a.m. to 11 p.m. We did nails, hair, coloring, eyelash, and eyebrow dying. A shampoo and wave cost $2.50 — can you believe that?” she chuckled. Fauna counted among her clientele such dignitaries as the mayor’s wife, sheriff’s wife, and movie stars.

When Forrest became ill with a heart condition, Fauna sold the beauty shop to care for her husband. Forrest died very suddenly in the early 1960s, and Fauna found herself facing several mortgages.

“Here I am left, I sold my business, I don’t have a job, I don’t have any insurance, I don’t have any money, but I have all of this property,” she said. With no prior experience, she managed to get the properties back into shape. She credits her success to good luck, a compassionate banker, and a spirit of learning through trial and error. She still owns several of the apartment units.

A Force in the Community

Fauna’s community activities included the Santa Monica Boys’ Club (which eventually became coed), of which she was twice president. She was very active in the Santa Monica Republican Women’s Club. In May 2006, at the age of 95, she was interviewed by The New York Times for her views as a California Republican on the subject of immigration. Several California Republican legislators had welcomed then-President Vicente Fox of Mexico on his visit to the state capitol with yellow “No mas!” buttons, displaying their anti-immigration views.

What was Fauna’s opinion about that? She was living at the time in Holiday Villa, an assisted-living home in Santa Monica, where the overwhelming majority of staff were born abroad; she saw that immigrants are needed to care for the elderly. She was quoted in the article, “If it weren’t for the help from the people here, I think I’d be a bag lady. I have people I can call in an emergency, but you can’t count on your friends or family for little things like opening a tube of toothpaste or getting you to the doctor. Maybe the congressmen think their pensions are so good they’ll be able to buy whatever they want when they’re old. But if we don’t have foreigners, we wouldn’t have anybody taking care of us.”

Fauna recalls when Santa Monica was just a small town and when there were no tall buildings on Wilshire Boulevard. She knew famous musician and television personality Lawrence Welk through the Boys Club and remembers the town’s excitement when in 1968 he built the high-rise building overlooking the ocean at 100 Wilshire Boulevard. The building was then known as “The Lawrence Welk Champagne Tower” and today remains among the city’s tallest office buildings. She misses restaurants, such as Madame Wu’s and Polly’s Pies, that have come and gone from Wilshire Boulevard. She was a regular at the ballroom dances held at Palisades Park.

April 12, 1945 is a day Fauna won’t forget. “I was working in a beauty shop in Ocean Park when President Franklin Roosevelt died. When the call came in, the girl lifted up all the hair dryers one by one and told the customers that Roosevelt had died. It was a shock, and everyone cried.”

Fauna later survived a second husband, Keaven Kane. As the family matriarch she has been the one who brought together the extended family. “It’s a miracle how the families all meshed together. That doesn’t usually happen,” she said. Although she has no children, some of her happiest memories are of helping to raise her nephew and other members of her family. Nearly 50 family members converged on Jan. 8 to celebrate her 100th birthday together.

Fauna now lives in an assisted-living home in West Los Angeles, where she is known for her sense of style, her sharp wit, and her matching outfits.

“When Fauna comes to the dining table, she greets us with, ‘Good morning, my girls,’ and tells us jokes. We all have to stop and take a look at her to see what she’s wearing, because she’s always color coordinated from head to toe,” said friend and fellow resident Bernice Calvaresi with a smile. “She never complains, she always has a smile, and she sets quite an example for us.”

When asked for the keys to her longevity, she notes that she has always been a very light eater. “Learn to control your temper,” she also advises. “Don’t spill out bad words at somebody because you can’t take them back.”

Perhaps her positive outlook and playful spirit have also contributed her longevity, and helped her enjoy a few dances at her 100th birthday party. “I always say tomorrow will be better than today. In reality, it truly is.”

By mirrormmg January 15, 2011
in Life and Arts
Related Posts