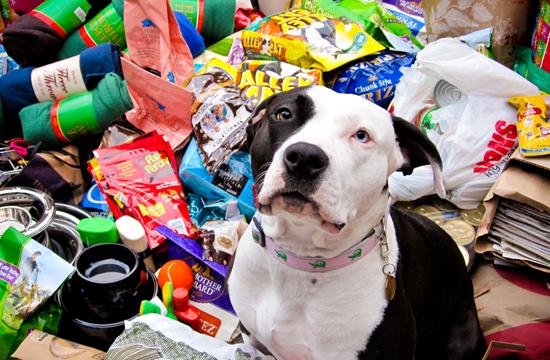 The final event was held on Jan. 8 at the Peet’s Coffee and Tea on Main Street in Santa Monica. Members of the public were able to drop off animal supplies such as food, towels, newspapers, and leashes or make a monetary contribution.

Shifting Gears Cycling Four Paws’ founder, Beth Brown, told the Mirror the winter campaign slogan was, “Make this holiday season un-FUR-gettable.” Four Peet’s Coffee locations participated in the events by allowing the public to drop off supplies, by posting posters about the campaign, and by offering discounts on their beverages to anyone that donated.

The two organizations also do events to educate the public about adopting animals from the shelters and spaying and neutering dogs to prevent over population. Lu Parker, founder of the Lu Parker Project and a KTLA reporter, explained that there is a big need that never ends for animals that end up in shelters because of foreclosures, strays on the street, and the lack of enough spaying and neutering. She also stressed that a person can “save a [dog’s] life by adopting them from a shelter.”

The Lu Parker Project is a nonprofit that began in July of 2010 with the goal “of bringing rescued animals and at risk teenagers together,” said Parker.

Their next event will be for Valentine’s Day. The goal of this event will be to raise money to buy animal beds for the animal shelters so the animals housed there don’t have to sleep on cement. People ordering roses from Brown’s business, Colors in Bloom, will be able to do this because when they pay for the cost of a bed it will include the roses. Brown stated this is an “incentive to buy a bed for an animal to share love for the animals and in return get roses to give to your loved one.”

By mirrormmg January 10, 2011
in Life and Arts
Related Posts