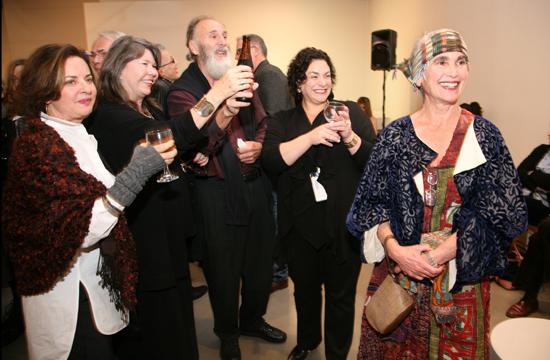 To honor a decade of art, exhibitions, and education, the Santa Monica Museum of Art threw a fundraising party for the dynamic tenure of Executive Director Elsa Longhauser. Art notables and Hollywood players flocked to the event to show support for the well-known and long devoted director of the contemporary art space.

More than 350 artists and art enthusiasts gathered at the Santa Monica Museum of Art (SMMoA) at Bergamot Station gallery, at 2525 Michigan Avenue on Jan. 9. “The Power of Ten,” a year-long celebration, launched with a donated art exhibition from 25 artists ready for auction. The artists created each work in homage to the director’s anniversary.

The unique crowd reflected the nature of SMMoA, Longhauser said, applauding the “amazing cross-section of people that fuel the pulse of the art world.” She called the artists the “life-blood” for donating works specifically for the evening, and gave special thanks to the patrons for their “generosity” to the art world.

“Thank you for stepping up, showing up, and celebrating the past decade, and raising a glass with us to the next one,” she said to a round of cheers.

Hopefuls dropped raffle tickets into designated white cement buckets placed in front of each piece, in an effort to claim coveted works in the name of philanthropy. Christopher Stanley of the television hit show “Mad Men,” who is also a SMMoA supporter and Longhauser’s “long-time friend,” read the winners of the artwork to an eager crowd.

Guests rushed to Longhauser to congratulate her on years of defining work at the museum. Her directorship began with a groundbreaking exhibition, “Steven Keene: Miracle Half Mile.” Over the course of three months, Keene created 10,000 on-site paintings, which visitors could purchase for less than $25 each. Anyone and everyone could be a collector.

In Longhauser’s related programming, international scholars, performers, and activists — including Howard Zinn, Dolores Huerta, Peter Sellars, Irving Blum, and Patti Smith — have connected the visual arts to other mediums of expression. She has also nurtured financial support from the Annenburg Foundation, HBO, The Irvine Foundation, and Los Angeles County.

Laurie Steelink, an artist who has worked with Track 16 gallery at the Bergamot Station for 15 years, applauded the event and the “good programming” held at SMMoA. The museum is working in conjunction with the gallery to host a lecture series expected later this year.

By mirrormmg January 12, 2011
in Life and Arts
Related Posts