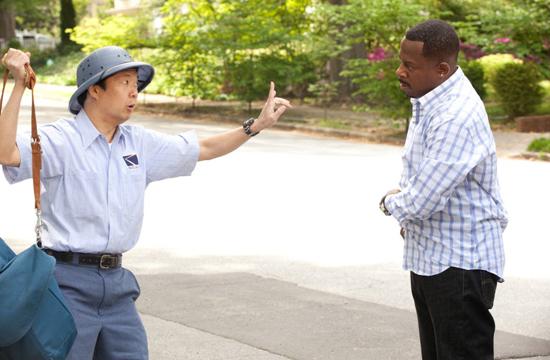 It is questionable whether fictional FBI agent Malcolm Turner could sport the same undercover persona for 11 years without some sly crook figuring him out. Martin Lawrence, who plays Malcolm Turner in the “Big Momma’s House” franchise, could not have been happier to return to the role he first introduced in 2000.

Starring opposite Brandon T. Jackson, Jessica Lucas, and Faizon Love in “Big Mommas: Like Father, Like Son,” Lawrence reprises his role as an undercover FBI agent doubling as “Big Momma.” Similar to the previous two films, Turner must don his “Big Momma” persona in order to solve a murder and protect his son.

Lawrence said “Big Mommas: Like Father, Like Son ” was quite the memorable experience, as he had a chance to reacquaint himself with Love (both worked together on “A Thin Line Between Love and Hate”) while establishing new working relationships with Jackson (“Tropic Thunder”) and Lucas (“Melrose Place”).

But, what Lawrence appreciates most about the latest chapter in the “Big Momma’s House” franchise is its wholesome messages of family and education. He believes the movie-going public appreciates what Big Momma, the character, stands for.

“I really enjoy playing ‘Big Momma,’” Lawrence said. “She is very endearing, smart, lovable, funny, and has some attitude.”

Indeed, Big Momma brings (and packs) a lot of heat in her character, just as she did in the previous two chapters of the trilogy. As for whether Lawrence enjoys playing Big Momma enough to return for a fourth installment, the venerable actor and standup comedian is going to have to play it by ear.

“That’s not really up to me,” Lawrence said about the prospects of bringing Big Momma back a fourth time.

There was also no talk of when – or if – “Bad Boys 3” would release, but Lawrence had more pressing issues on his table, such as how the other “Part 3” he is a part of will perform as it hits theaters.

Interestingly enough, despite Fox rolling out three chapters of the “Big Momma” saga (if one can even call her story a saga), Lawrence does not think much has changed since 2000, at least in terms of the film franchise or the comedy genre in general.

“Not really,“ Lawrence said when asked whether the latest “Big Momma’s House” chapter or the state of the comedy genre as a whole has changed in the past decade. “It is what it is. People always enjoy a good comedy, and I think people will find [this movie] funny, too.”

Speaking of funny, when asked what were his favorite scenes in “Big Mommas: Like Father, Like Son,” one stood out as most comical to him. Deep in the film, Lawrence’s Big Momma character is engaged in a steamy game of Twister with a college janitor portrayed by Love. Intended to evoke laugh-out-loud laughter due to the volume of innuendos and the juxtaposition of the characters, Lawrence quipped the scene was one of the most memorable to him.

“I enjoyed the Twister scene the most. You know, Faizon Love was really good in that scene,” he told the Mirror.

Just the same, Lawrence candidly shared with this writer the other scene he cherished most: the bonding scene Malcolm Turner shared with his son, Trent Pierce (Jackson), shortly after the film’s climax.

By way of background, Malcolm urges his son to go to college despite Trent’s wishes to become a rap star. As Trent is 17 years old, however, he needs his father, Malcolm, to sign a contract with a record label, and early on in the film, both father and son go head-to-head over which is more important in the present time: the potential to earn millions as a hip hop star today or spend four years at Duke University to build toward a solid career in the future.

As the film comes to an end, father and son have a heart-to-heart chat, with Malcolm conceding to his son and giving in to his hip hop career. However, Trent had other plans. The way the scene transpired on screen, Lawrence felt was the ultimate feel-good message.

“The scene at the end, where I tell my son I’ll sign his contract and he can go off and rap, but then he tells me there is no rush to greatness and he wants to go to college, that was definitely one of my favorites,” Lawrence said.

By mirrormmg February 18, 2011
in Life and Arts
Related Posts