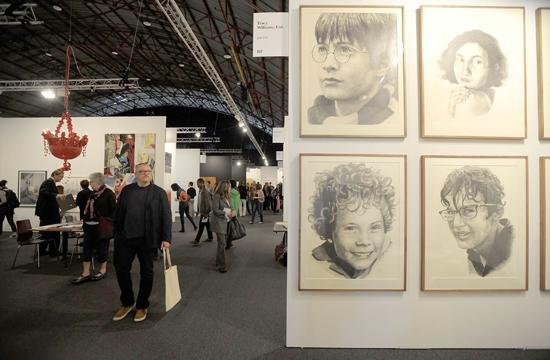 The second annual Art Los Angeles Contemporary art fair, held at Barker Hangar in Santa Monica Jan. 27 through 30, showcased contemporary art, sculpture, photography, performances, and installations from 70 local, national, and international galleries. But while walking through the various stalls and taking in the art, this reporter felt that the show was a trip into the future, an experience inside a “Star Trek” holodeck where anything could happen.

Take for example the sculpture by Richard Jackson at the David Kordansky Gallery. Entitled “Upside Down Man,” it portrayed a naked man, made from fiberglass and acrylic paint, painted bright blue, upside down in a yoga pose, and sporting a wineglass emerging from a most unlikely portion of his anatomy. Nearby, a similar sculpture, a silvery bear, also upside down, also equipped with a wine glass and shaker, spun around and around. These were beautiful objects d’arte but also undeniably and delightfully wacky.

At New York’s Allegra La Viola Gallery, two models stood in a booth, posing as the figures in a recreation of a painting that seemed to be of Adam and Eve, moving just slightly so the viewer would know they were real people. Jennifer Catron, one of the two models and co-creators (with Paul Outlaw) of this piece, explained to the Mirror that the idea was to recreate famous works of art (in addition to their live performances, Catron and Outlaw were on display in a series of photographs spoofing paintings, with the models in authentic costumes).

At the Luis de Jesus Gallery, Federico Solmi’s “Douche Bag City” offered a futuristic take on the hanging of numerous small framed pictures: a series of 15 small frames enclosing LCD panels on which videos played in a continuous loop, each one different, featuring mysterious animated works.

Some galleries featured canvases so large that they took up a whole wall, absorbing the viewer in spiral circular patterns or monochromes that looked like giant pieces of fabric. On the other hand, Josh Mannis’ “Generations” at Thomas Solomon Gallery, consisted of small white canvases blotted with black ink daubs that resembled Rorschach psychological tests.

At ACE Gallery, the Date Farmers exhibited massive and amusing cartoon-like paintings of creatures with duck heads and titles like “Servicios D.J. Pleyboy.” The Date Farmers are Armando Lama and Carlos Ramirez, natives of Indio, California (where dates are grown) and their influences include Oaxacan sign painting, Mexican street murals, and comic strips.

Comics were also an inspiration for the works of Ken Solomon at Josee Bienvenu Gallery from New York. Solomon’s paintings recreated Google Search pages with thumbnail images of well-known artists like Roy Lichtenstein (who of course also dealt in comic book recreations) painted in watercolor but made to look like real Google pages.

Performances included a poetry recitation by a white wolf who sat on a set of wooden crates in a corner of the “Mountain Bar” lounge. The white wolf was from “Poetic Research Bureau,” a.k.a Scott Acosta and Moscori, who were promoting their children’s book, “As Above, So Below.”

Other performances were by Los Angeles non-profit West of Rome, who staged pieces at the opening night reception; musician Brendan Fowler; and dancer Simone Forti.

Attendees who needed to socialize, network, and take breaks from the heavy dosage of pure art found refuge in the Mountain Bar, and at Forage, a “pop-up” restaurant serving the cuisine of the actual restaurant of that name. Chef Jason Kim’s salads and desserts looked like found art and satisfied the palates of the art lovers.

By the close of the fair, Director Tim Fleming received reports of sales from many of the exhibiting galleries. Among the sales were Lisa Ann Auerbach’s “Revolution Resolution” at Gavlak Gallery, which was sold to a major U.S. museum, and Robert Russell’s MOCA Collection (John Baldessari) sold by Francois Ghebaly Gallery to Elizabeth and Arthur Forney of the FLAX Foundation.

“We are pleased with the results of our sophomore year,” said Fleming. “Museum purchases, international collectors and citywide partnerships and programming were all a success. We look forward to next January’s fair.”

By mirrormmg February 1, 2011
in Life and Arts
Related Posts