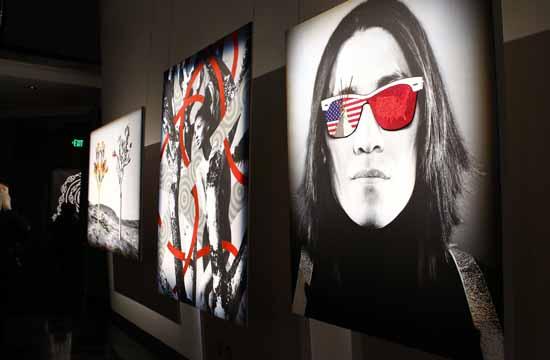 The fashion world merged beautiful women with the deep cultural background of Australia’s ancient, Indigenous heritage to create a melting pot of modern music, art, and fashion. The politically charged exhibit “NOMAD: Two Worlds” embodies the positive message of Reconciliation from the ashes of a tragic cultural devastation.

Feb. 22 marked the beginning of a week-long exhibition at Pier 59 Studios at the Bergamot Station in Santa Monica. The collaborative project focuses on the cultural divide experienced by Australia’s indigenous people, a reality witnessed by fashion photographer and Australian native Russell James. The exhibit features art, music, and film that James has evolved for more than a decade.

James is best known for his provocative work capturing Victoria Secret Models backstage or his work for Sports Illustrated filming some of the most beautiful women in the world on glistening, sandy beaches. NOMAD (nomadtwoworlds.com) in the L.A. showcases many beautiful women, including Heidi Klum, Adriana Lima, and Estella Warren in an underwater video, in sweeping landscapes accented with colorful tribal symbols representative of different spiritual beliefs.

The photographs are organic and vibrant while incorporating very modern elements. Australian, Native American, and Haitian Indigenous artists, including Australian artist Clifton Bieundurry, have collaborated with James to create a set of hybrid art pieces, many of which premiered in L.A. area for the first time. The beauty of the pieces is a superficial jump from the engraved faces of Indigenous men of earlier collections.

“NOMAD: Two Worlds” started in 1999 in New York. The project took a pivotal turn when then Prime Minister Kevin Rudd apologized to Indigenous Australians for the mistreatment and genocide by the government endured for generations. The exhibition strives to embrace a long cultural history and move forward with the idea of recovery and reconciliation. James along with leaders from the Indigenous community joined with Will.i.am of the Black Eyed Peas, Hugh Jackman, and Donna Karan to create the first collaborative effort in 2009.

NOMAD has been on a world tour with help of some powerful friends this time around. The event is presented by Richard Branson, the mogul of Virgin Airlines and V Australia his newest international airline. Fashion designer Donna Karan joined with URBAN ZEN Foundation (www.urbanzen.org), a charitable organization dedicated to the preservation and celebration of Indigenous cultures worldwide.

Karan said that despite hearing so much about all of the difficulties and trauma faced by peoples in many cultures, through collective, cultural healing “everything can be resolved.”

Following the presentation, a video collaboration between Taboo from The Black Eyed Peas, a Shoshone Native American, and a young Indigenous Australian music artist Corey Webster. Tribal leaders blessed the event and Australian Nyungar elder Dr. Richard Walley addressed the importance of preserving heritage before performing a traditional dance for the crowd.

And then Barbra Streisand showed up. A good friend of Karan’s, the songstress sent the gallery into a frenzy turning the hot spot night into the place to be.

By mirrormmg February 24, 2011
in Life and Arts
Related Posts