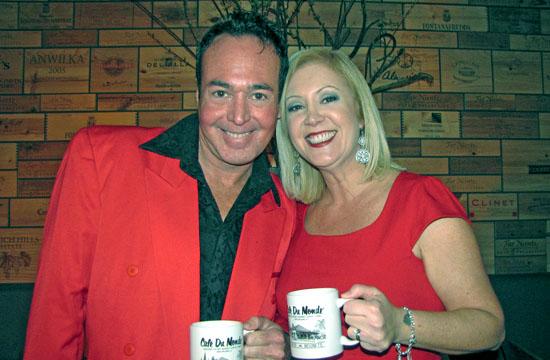 It sounded like a good idea. Recreate the panache of New Orleans’ The Original Café Du Monde, which for two hundred years has been serving delicious coffee and the indescribably luscious beignets (ben-yays), a decadent cross between a French pastry and a doughnut, deep fried and drenched in powdered confectioner’s sugar.

Producers Peggy Sweeney-McDonald and Jay Basist created “Meanwhile, Back At Café Du Monde” which cannot be considered a variation on a theme as it consists of an ordinary dinner at a restaurant followed by monologues recited mostly by obscure celebrity guests.

Before going further, it should be pointed out that the Getty Museum, in its Celebration of the short story literary series, had a splendid program called “The Food Fiction” with stories about food experiences read by John Lithgow, Samatha Egger, Rene Auberjonois, and Fionnula Flanagan. It was an extremely entertaining, literary evening… sans the actual food.

“Meanwhile, Back At Café Du Monde” at the Sonoma Wine Garden was less than successful for two reasons. The food was slopped down on tiny salad plates by only a few servers, not nearly enough to service the 60 guests. The miniscule portions were more like a tasting and not enough to be called a $60 dinner. Some guests didn’t receive all that was listed on the menu and commented that they “would grab a bite on the Promenade when the event ended.” As far as the actual food, while somewhat tasty, everything was cold and had no New Orleans connection, right down to the dessert, which was lemon bars, and not the wonderful beignets.

It could be that this restaurant is just not equipped for large parties as the bar and outdoor seating areas were packed with couples and singles.

The second problem was the monologues recited by the celebrity guests, including Lynne Curtin of “Real Housewives of Orange County,” “Bikini Chef” Susan Irby, and Savannah Wise, who appeared in “Ragtime” on Broadway. The material did not appear to be prepared monologues but long, extemporaneous, stream-of-consciousness wanderings about cooking experiences that were somewhat obtuse and not very compelling.

The concept is an interesting one and Sweeney-McDonald has been producing these culinary/monologues events around the country. That said, with other bookings scheduled in the L.A. area, it would be a good idea to refine the food experience so that it’s commensurate with the cost and polish the monologues so that the diners get a more theatrical experience. Also, starting on time would add to making this a professional production.

By mirrormmg February 28, 2011
in Life and Arts
Related Posts