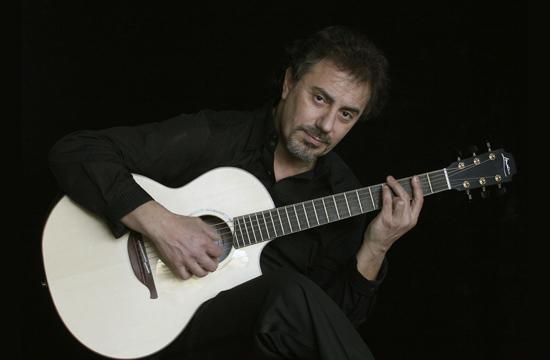 French guitarist Pierre Bensusan performed to near at-capacity audience on Saturday, Feb 5 at McCabe’s Guitar Shop in Santa Monica. Bensusan then made a special appearance in Hollywood at Musician Institute on Monday, Feb 7 for a special workshop for the students.

The veteran musician is on a full tour for his latest album “Vividly,” which he described as 25 years in the making. His first album, “Prés de Paris,” debuted 35 years ago. As the 150 people or so people who joined him at McCabe’s saw and heard, Bensusan is not the type of performer to stick to a rigid set list on stage.

The music is for the audience, he explained, who helps capture important aspects of his pieces that may help them in their daily lives. As a servant and maker of music he said he must be careful not to “fall easily into the law of gravity” and become stale. He seeks to play pieces differently by going with his mood and the flow of the night, he said.

“Every time, every different piece is a sort of companion for a while with me, and a companion that I learn to keep with me for a long time,” he said.

He has been touring in the U.S. annually since 1979, only being detoured by such major events as the eruption of the volcano Eyjafjallajokull in Iceland last spring. The musician’s work ethic does not seem to slow this year with a grueling schedule that started Jan. 15 in New York and will continue with 43 performances throughout the country, before he heads back to Europe at the end of March.

“I have a busy touring life, but I am nothing but happy, so excited, to play and give the best part of myself every night, to recreate myself,” Bensusan said.

Born in Oran, French-Algeria, in 1957, Bensusan’s family moved to Paris when he was only 4 years old. He began formal studies on piano at the age of 7, and at 11 taught himself guitar. Described by the L.A. Times as “one of the most unique and brilliant acoustic guitar veterans in the world music scene today,” Bensusan was voted “Best World Music Guitar Player in 2008” by Guitar Player Magazine Readers Choice.

Bensusan has a working relationship with his wife, Doatea Cornu Bensusan, who is a lyricist and modern dancer. Married 26 years, the two work together developing music and co-produced his album. “I’m very fortunate,” he said, “her eyes, ear, perception, she helps me get there.”

The two wrote a song, “Les Places De Liberte,” about the plight of the Romanians and Bulgarians, who were kicked out of France during “an extremist climate,” an act by the French government that he called “intolerable.” Although he does not claim to be a political singer, he said the issue could not be ignored and he wanted to echo what was happening. He dedicates the song to the Algerian writer Djemila Benhabib, a woman who has spoken out for the cause of women in the oppressive Arabic culture.

Bensusan will appear next in Santa Barbara on Feb. 9 before making appearances on his way to Berkely Feb. 17, and continuing all the way to Washington State for his West Coast tour.

By mirrormmg February 13, 2011
in Life and Arts
Related Posts