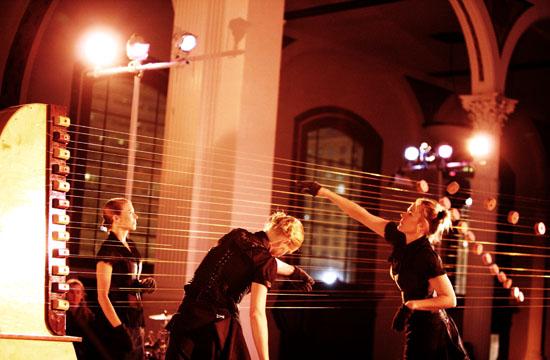 In science, String Theory is about particle physics, but in the art/music/dance world it is, in the words of co-founder Holly Rothschild, “a hybrid ensemble of musicians, dancers, and visual artists who come together to create an immersive performance that revolves around giant site-specific instruments.”

The instruments, actually installations that have been called “sonic sculptures,” are created by Holly’s husband, designer Luke Rothschild, while cellist Joseph Harvey composes the music that accompanies Holly’s dance pieces. One such performance, “14 Lengths of Desire,” will be presented Feb. 19 at the Eli and Edythe Broad Stage at SMC Performing Arts Center.

The evening-length work, exploring 14 aspects of love, will feature Luke Rothschild’s “Curve Harp,” a six-foot tall sonic sculpture that sits on the stage with its 24 musical strings extending out over the audience, ending at the balcony. The audience will be literally sitting inside the “instrument.”

“The sculptural resonators that I have built, which are invented instruments, [are] the resonating element of the instrument,” Luke explained. “What happens is: the strings go out from the harp and emanate out to the stage and attach, in the case of the Broad Stage, to a steel bar that the lighting is hung from. It’s on the balcony across the stage about 80 feet away. We attach our musical wire to the buildings and attach it to the harp and then we play it down at the harp so we transform the stage into a musical instrument.”

Also included will be the Elipse Harp, set up across the stage 15 feet from the ground; The Skirt Harp, a giant “tutu” or dance costume made from copper and brass with 11 pick ups; Cyclodrums, a nine-foot wall of percussion; and more traditional instruments like the cello, musical saw, Theremin, sax, and violin. The performance also features an ensemble of dancers, choreographed by Holly, along with a short film and video installations.

Holly and Luke met in Chicago 12 years ago, where they were working in their respective fields of dance and design. “A lot of people were doing multimedia work and we thought that [since] we came from very different backgrounds, we were really interested in this idea of how we could bring our disciplines together,” said Holly.

The Rothschilds came to Los Angeles about eight years ago, at which time they officially formed String Theory. One reason for their move was their desire to work on film scores. They have created scores for HBO Documentary Films, for the Sony release “Red Sands,” and for the recent film “Jean Michel Basquiat – Radiant Child.”

Their performances have taken place in the U.S. and in other countries and have ranged from the 2006 Grammy Awards to the 2008 World Festival of Sacred Music and the opening festivities for The Walt Disney Concert Hall.

The size and scale of Luke’s sonic sculptures provides Holly with inspiration for her dance pieces. In addition to simply dancing on stage, the dancers in String Theory works also “play” the giant harps by dancing upon them.

In terms of the style of their music, Holly said that “due to the influence of [cellist Harvey] we do a lot of 15th century Spanish Renaissance.” but “we also do pop music.” Luke characterized String Theory as a mixture of classical, pop, and film score-type music.

By mirrormmg February 20, 2011
in Life and Arts
Related Posts