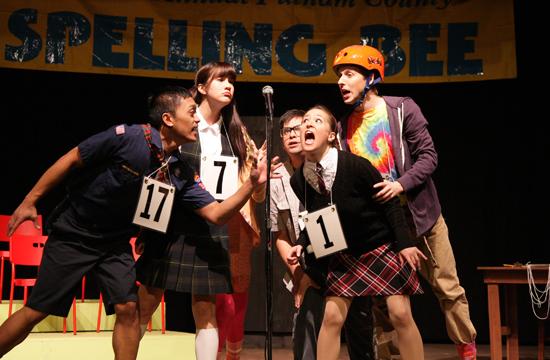 Maybe it’s because of America’s love of contests that a musical about a spelling bee doesn’t seem like such a bad idea. “The 25th Annual Putnam County Spelling Bee” originated as a short play created by an improv collective called the Farm. Adapted as a full-length show with music and lyrics by William Finn, book by Rachel Sheinkin, and conception by Rebecca Feldman (the Farm’s artistic director) and directed on Broadway by James Lapine, it won two Tony Awards in 2005.

The Morgan-Wixson Theatre’s production of “Putnam County Spelling Bee” brings together some of the strongest talent from this company’s regulars: direction by Valerie Rachelle, choreography by Keenon Hooks, and musical direction by producer Anne Gesling. The show’s comedy sketch roots show clearly, for although the dancing is good and the music okay if not memorable, it’s the witty dialogue and lyrics and the sheer silliness of the action that make the play entertaining.

The setting is a school “gymnacafetorium” with chairs on one side for the contestants and a table at the other side for the “word pronouncer” and the host. The latter, Rona Lisa Peretti (Sarah Krieg) is a realtor who likes to host spelling bees. On three different occasions she sings about her favorite moment though it seems that several moments vie for that title. Krieg, who in real life sings in a group called the Glamazons, has a powerful voice and one can readily believe that her Rona is not only a realtor but someone whose greatest pleasure comes from reliving her past glory as a former winner of the Spelling Bee.

The other adults are Vice Principal and Word Pronouncer Douglas Panch (Michael Heimos, wonderfully supercilious as he gives ludicrous definitions and usage sentences for the bee’s most obscure words) and David Laffey as “Mitch,” a Community Service guy who as the “comfort counselor,” escorts the eliminated contestants off the stage. (His first-act singing finale number is as soulful as it is consoling).

The student contestants include Chip (Ryan Chua) last year’s winner, who struggles with physical urges that may jeopardize his chances; Logainne (Amy Coles), a lisping activist; Leaf (Edward Kinney-Ostro) a hippie type who sings “I’m Not That Smart;” Marcy (Chrissa Villanueva), the stereotype of the Asian-American overachiever; William Barfee (James Paul Xavier), a brainy nerd who moves his “magic foot” as he spells; and Olive (Ann Villella), a last-minute entry whose parents are not in attendance.

As these characters spell, sing, dance, and emote about their hang-ups, one might be thinking that this is a strange format for a musical. Yet by the second act (in which the bee narrows down to the finalists), audiences are lured in by the developing characterizations. Each person reveals a vulnerable spot. Life lessons are learned as we also learn how to spell words like “boanthropy” (the delusion that one is an ox) and “crepuscule” (the original play’s title, meaning twilight).

For an evening or afternoon of good belly laughs, “The 25th Annual Putnam County Spelling Bee” is well worth the time and admission price. One warning: in a custom held over from the Broadway show, at each show, four audience members are selected to be contestants along with the cast. This means you might be asked to spell some really tough words that you never dreamed existed.

By mirrormmg March 22, 2011
in Life and Arts
Related Posts