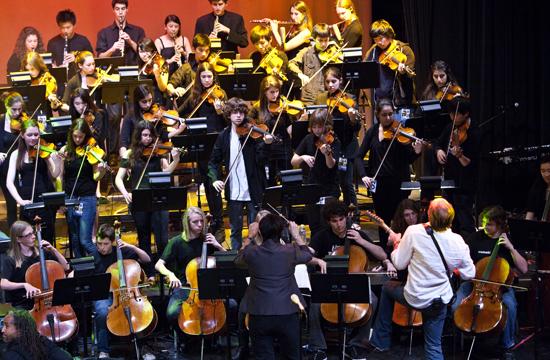 As of press time the sold out concert had raised about $78,500 from tickets sales and the live auction according to Linda Gross, the executive director of SMMEF. The Artist for the Arts Foundation (AFTAF), a nonprofit foundation dedicated to producing fundraising concerts, produced the concert for the sixth time. The members of Venice helped form AFTAF with the goal of obtaining sponsorships to write-off one hundred percent of their concert production costs so all the ticket proceeds could help fund educational programs.

As in past years, student musicians from the school district played a big part in the concert. Members of Santa Monica High School’s orchestra and choir were on stage with the headliners on most of their songs. The Malibu Horns, who named themselves the Sax Pistols also played, as did the student guitarists from Olympic High School, and the Malibu Drum Corps.

America played a six-song set which included their classic hits “Ventura Highway” and “Sister Golden Hair.” Two time Rock ‘n Roll Hall of Famer inductee Crosby was the concert’s surprise special guest. His six-song set included “Ohio” and “Guenevere” which are Crosby, Stills, Nash and Young classics. Richard Page’s performance included two songs, “Broken Wings” and “Kyrie.” from when he was a member of the Mr. Mister band. Venice played “Back To The Well” and “Too Late For Me” in addition to four of their other hits. All of the headliners and student musicians took part in the finale performance of the Crosby, Stills, Nash and Young classic “Suite: Judy Blue Eyes.”

Venice’s Kipp Lennon commented during the performance “we know times are tough so for you to be here means the world to us.” Some members of his band currently have children in the school district and Page mentioned that all four of his children went through the district’s schools.

The Mirror spoke with Chris Horvath, one of the concert’s arrangers and musical directors. He said the goal was to give the student musicians “a sense of what its like to do a real show for the buying public. We asked the same of the students as we do of professional musicians.” The student preparation for the concert began a week and a half before “just like in the real world.” He noticed how “surprised the students were about how disorganized things can be” before and during a performance. Horvath scores and arranges music for television and film.

The audience included not only people from the Santa Monica and Malibu community but also fans of the headliners from other areas. Linda and Renee Comeau came from Santa Maria. Renee, an avid Venice fan, learned about the concert on the Venice Central website.

SMMEF was established in 1982 to help the Santa Monica-Malibu School District cope with severe federal and state education budget cuts. They help fund programs in the arts, academics, and athletics.

By mirrormmg March 7, 2011
in Life and Arts
Related Posts