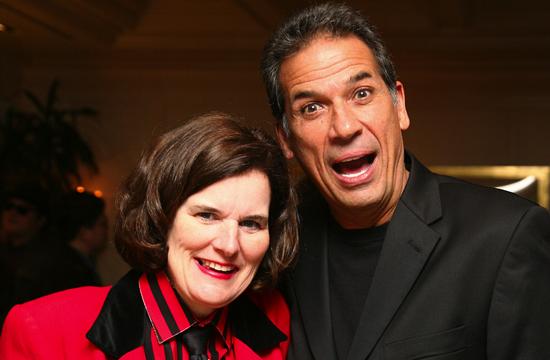 Laughter has become a consistent way to support the arts at Santa Monica-Malibu Unified School District’s McKinley Elementary School thanks to the generosity of legendary stand-up comedians Bobby Collins and Paula Poundstone. On March 29 they performed an annual benefit comedy night for the eleventh year in a row at the Shutters Beach Hotel.

There wasn’t a moment without a chuckle in the room after Collins took the stage with his natural, relaxed, storytelling comedic style. Many of Collins routines reflected his New York upbringing and the fact that he still lives there on and off during the year. His humor also included jokes about the west coast lifestyle and regional stereotypes.

After the performance Collins told the Mirror he participates every year because he “always wants to give back to the neighborhood.”

Poundstone was true to her usual form at the benefit. She wore a Dr. Seuss tie, suspenders, a red suit, and of course she sipped on her ever present can of Diet Pepsi during her riveting performance. Her humor drew one laugh after another as she poked fun at the school district, its staff, and her experiences as a parent of three children. Nothing was left untouched by her improvisational style not even how many years she has done the benefit.

Collins has opened for such greats as Frank Sinatra, Cher, Julio Iglesias, Tony Bennet, and Dolly Parton. He also made many television, and movie appearances including the 2010 film “I am Comic.” He is a regular on XM Satellite Radio and has released seven comedy albums: “I’m on the Boat,” “Women and Children First,” “On the Inside,” “I Wanna Go Home,” “You’re Not Coming With Us,” “Mr. New York,” and “Out of Bounds.”

Poundstone has been performing comedy for 30 years. Her comedic talent started very young and was noticed by her kindergarten teacher Mrs. Bump who wrote to her parents, “I have enjoyed many of Paula’s humorous comments about our activities.” In a 2009 interview, Poundstone told the Mirror that letter was framed and hangs on the wall in her home. She has received numerous awards since her career started flourishing, including two Cable ACE awards for performances on HBO and an Emmy Award for her field pieces on PBS’s “Life and Times.”

Poundstone began performing for McKinley while her children were students there. Wendy Wax-Gellis, the school principal at the time, told this reporter she wanted to have a comedy night “to bring teachers and parents together to have fun.” She helped form the partnership with Shutters to host the event and she still makes the effort to attend the benefit every year, even though now she works elsewhere in the district.

In her 2009 Mirror interview Poundstone stated she did her first benefit “originally because they asked her” but now its “one of her favorite nights to perform because she loves being with the community.” She views it as a “night off for everybody including me.”

McKinley’s current principal, Irene Gonzalez, told the Mirror this year’s comedy night raised approximately $4,600 from ticket sales and a live auction which will all go to support music and arts programs at the school. Last year $7,700 was made because there was a greater amount of large auction items. The money is particularly needed for programs for students in kindergarten through second grade because district funded arts programs focus on third through fifth graders.

The Mirror also spoke with Miriam Billington, the McKinley PTA fundraising chair that coordinated the benefit. She stressed, “Keeping art and music is very challenging in a rough economy” Without this program, many of the children at the school would not be exposed to the arts. She also noted that many former McKinley parents still attend the benefit because of the strong bond they developed with McKinley when their children were there.

McKinley parent Kerrie Nordberg has come to the benefit for the last several years. “It’s such a wonderful night to be with other parents,” she said. “[To] see each other outside of school, and support the arts.”

By mirrormmg March 31, 2011
in Life and Arts
Related Posts