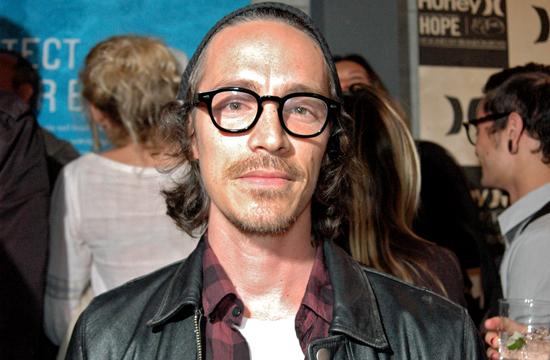 The world’s oceans are home to more than 97 percent of all life on Earth. Yet, those resources are dwindling from over-fishing and pollution— a majority from land-based activities. Activist and Incubus lead singer Brandon Boyd partnered with surf brand Hurley to raise funds and awareness about ocean conservation with a limited edition clothing line.

More than 3.5 billion people depend on the ocean for their primary source of protein, yet as many as 70 percent of global fisheries are at or beyond their capacity, according to the Seathos Foundation. Seathos, which promotes global awareness and ocean conservation, hosted Boyd and Hurley to promote awareness of the human impact on the world’s oceans at its headquarters located on 1212 Abbot Kinney Boulevard in Venice.

Attendees crammed into Seathos’ three-story space to preview Boyd’s artwork and the art-inspired clothing line. Portions of the sales from the limited edition fashions will benefit H.O.P.E. (Helping Other People Everywhere), a non-profit that involves artists to support social projects around the world.

Braving the chill and rain, members from the surf, art, and music world converged on March 24 to view simple, but emotive watercolor and ink drawings that Boyd created for the project. Boyd began working two years ago with H.O.P.E. for a benefit for those affected by the tragedies in the Darfur Region. His friendship with Hurley fueled the collaboration. The surfer, writer, musician, and artist has long been a vocal advocate for ocean preservation.

“I did go into this project with more ideas as to the message I was attempting to convey,” Boyd said via e-mail. “I normally enjoy staring into a blank canvas and allowing my hand to be guided by some phantom energy, and in this case it was no different. But I just had more ideas beforehand than I usually do. I knew I wanted it to be simple and childlike, yet evocative.”

Actors Eric Balfour, Michelle Rodriguez, and Seathos supporter Danny Moder are a few celebs that made it out for the party. Bob Hurley, founder of the Hurley brand, Chris Jensen and Michael Schwab, founders of Seathos, joined the crowd that literally had people rubbing elbows in the narrow headquarters. Jensen, according to Boyd, summed up the evening with one rousing speech about all the heart that went into the project.

“There’s so many problems, it’s hard to figure out which one you want to pick,” Jensen said. “You kind of want to follow the one that is close to your heart … All I can say is really try to pay attention to what’s going on out there and try to make a difference because everyone counts.”

For those who want to see the collection first hand, a second event on April 2 will be open to the public featuring the original works, as well as live mural painting by Boyd. The event will run 6 p.m. to 10 p.m. at the Hurley Space Gallery located at 1945 Placentia Avenue in Costa Mesa. Anyone can find the collection at Buckle stores or from the comfort of home at Hurley.com.

By mirrormmg March 27, 2011
in Life and Arts
Related Posts