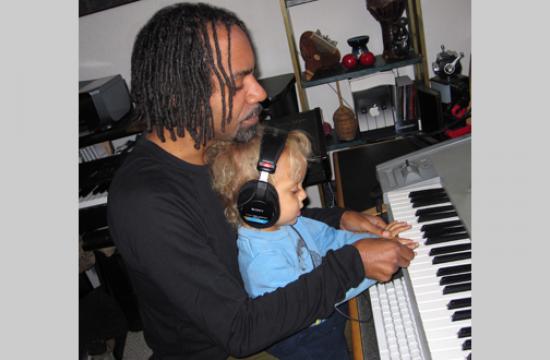 Remember those songs we all sang as children, like “Three Blind Mice” and “The Itsy Bitsy Spider?” These and other children’s songs have been revamped with a funk groove on the new CD “Groove Kid Nation: The Wheels on the Bus.” Produced by veteran musician and Santa Monica resident Rodney Lee, the album serves up soul-funk arrangements of traditional kids’ songs and a couple of modern originals, played and sung by a bevy of seasoned musicians.

The opening track, “Wheels on the Bus” uses the old song to introduce the “Groove Kid Nation” concept. A slow funk rhythm is accompanied by Jeff Robinson’s vocal, Andre Berry’s pulsating bass, and Fred Clark’s wa-wa guitar. “Froggy Went A’ Courtin’” receives an assist from the sax playing of Mindi Abair; the Itsy Bitsy Spider’s song is sung by Janelle Sadler with piano by Lee himself. Also included are two originals by Lee, “Bud the Bird,” which “introduces the voice as an instrument,” and “Soul Clap,” which introduces kids to the rhythms of different instruments. All the tracks are danceable (this writer recommends that parents do their dancercises to “Groove Kid Nation.”)

Each song also features an animal character that “plays” a solo on the track. Thus, Froggy in “Froggy Went A’ Courtin’” is a sax player; the Itsy Bitsy Spider is a pianist; the Three Blind Mice are Bobby Mouse on bass, Darlene Mouse on drums, and Gilbert Mouse on guitar. A ten-page booklet enclosed with the CD features illustrations of the animal musicians.

Lee’s inspiration for “Groove Kid Nation” was the experience of being the father of the now-two year old Razz. “In a nutshell, I had a kid and I just started looking for music for him. [But] I was finding stuff that didn’t appeal to me.” Growing up during the 1960s and 1970s, Lee was familiar with such children’s fare as “Fat Albert” and the Jackson Five cartoons but he thought that there had to be “some really hip cool” songs for children. Being a musician, he was “more discerning” than most people about wanting songs that he and his son “could listen to over and over again and not get tired of.”

In addition to the old favorites and his own songs, Lee includes “Inchworm” from the film “Hans Christian Anderson.” It was a song Lee had been introduced to through his father. “It’s kind of a jazz standard nowadays. After I did it, I realized it’s a little more advanced than the other songs.”

He had intended for the songs to be just for his child and his friends but “it came together so well I said let’s just make a whole record out of it.” The musicians are “co-workers” of Lee’s, having worked with him on tours and recording sessions since Lee came to Los Angeles in 1991.

At a transitional time for the music industry, self-generating an album of songs for the children’s market might seem like a big financial risk. Lee is promoting “Groove Kid Nation” through a web site and through parenting magazines. A tour with the backing musicians would be too expensive and difficult to mount, he admits.

Nevertheless, Lee is donating ten percent of the proceeds from “Groove Kid Nation” to CARE, a humanitarian organization fighting poverty. He had donated money to CARE previously when playing in a duo. “You get older and you feel kids are the most precious thing on the planet-anything you can try to do to help them.

“A lot of people say ‘I’ll make a whole lot of money and then I’ll donate. I came to a place where I said ‘Let’s just donate now.’ ”

Lee and his backup band performed songs from “Groove Kid Nation” on March 13 at Capoeira Besouro Studio in Santa Monica. The event was a benefit for the YWCA Family Cooperative Preschool and attracted a bevy of toddlers who either sat on the laps of their parents or ran and danced around the studio. One little girl later told Lee she wanted to play the piano like him and wondered if a piano could be lifted up and carried about.

“It’s a little bit too big to carry,” Lee told her. “But I’m glad that you like the piano.”

By mirrormmg March 14, 2011
in Life and Arts
Related Posts