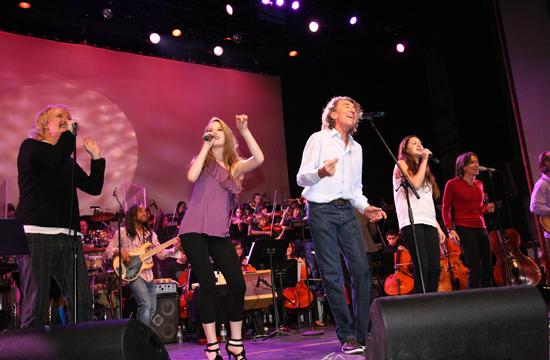 Santa Monica High School’s Barnum Hall is going to really rock this Saturday night with the sounds of America, Richard Page of Mr. Mister, Venice (the band), and a legendary special guest for the eighth benefit concert for the Santa Monica-Malibu Education Foundation’s (SMMEF) “For The Arts” campaign.

Mark Steines of “Entertainment Tonight” will be hosting the concert for the fifth time and as in past concerts Santa Monica High School’s choir, orchestra, and jazz band will be accompanying the headliners.

The Artist for the Arts Foundation (AFTAF), a nonprofit foundation dedicated to producing fundraising concerts, is producing the concert for the sixth time. The members of Venice helped form AFTAF with the goal of obtaining sponsorships to write-off one hundred percent of their concert production costs so all the ticket proceeds could help fund educational programs.

Venice’s Michael Lennon will once again be the concert’s Musical Director. Venice began in 1977 and is made up of two sets of brothers who are cousins to each other. Two of the band members are the younger brothers of the Lennon Sisters. After growing up in musical families they gravitated towards each other after playing at high school parties and dances.

SMMEF was established in 1982 to help the Santa Monica-Malibu School District cope with severe federal and state education budget cuts. They help fund programs in the arts, academics, and athletics.

Tickets can still be purchased at www.smmef.org

By mirrormmg March 5, 2011
in Life and Arts
Related Posts