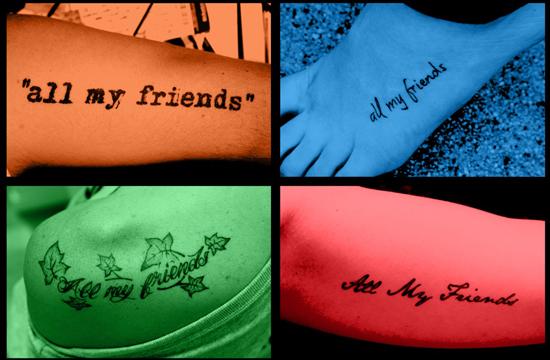 The filmmakers behind the documentary project “All My Friends” take their love of the band LCD Soundsystem pretty seriously – and they’ve got the tattoos to prove it.  Taking fandom seriously, a few of the filmmakers had their favorite lyric from a song (which also happens to be the title of their film) inked on their skin forever. It’s a fitting testament to their passion for the band.

The creators of the “All My Friends” project, Alex Jaspersen and Hytham Kilani, are gearing up for a cross-country trip to see LCD Soundsystem’s final performance on April 2 at Madison Square Garden in New York City. To make the trip – and their film – a reality, they launched a fundraising campaign on the increasingly popular crowd funding website www.Kickstarter.com, and they only have a few days left to reach their goal of $16,750.

The money will go toward documenting their pilgrimage from Los Angeles to New York and toward creating a film that’s ultimately about the power of friendship and the importance of seizing the moment, specifically through music. As Kilani explains, “a band only breaks up for the first time once.”

LCD Soundsystem, a dance punk band headed by James Murphy, decided to split up after just three critically acclaimed albums, culminating with last year’s release “This Is Happening.” Kilani, Jaspersen, and their crew managed to get tickets to the final show, despite the fact that it sold out at record speeds and many fans were unable to buy tickets because so many of them were snapped up by scalpers. LCD Soundsystem’s Murphy expressed his frustration with the scalpers and the ticket glitches were resolved, but the chaos sent a wave of panic across the band’s fan base.

It’s the positive energy of the music and the lyrics that inspire LCD Soundsystem lovers like Kilani and Jaspersen, and they hope to meet other fans as they drive across the country and to film these fans as they share their stories and their reasons for loving LCD Soundsystem’s music. “The music brought us all together,” Kilani says. They have mapped out a route based on the location of fans they have contacted online and who have volunteered to appear in the film. The circuitous route takes them to cities like Austin, Chicago, and Ann Arbor – and everywhere in between. The filmmakers aim to capture the positive spirit of the band and the fans on camera, and to form lasting friendships in the process.

Kilani and Jaspersen have been in contact with LCD Soundsystem’s management, but it is not decided whether the band will be involved in the project. “We’re not doing it because we want to make a lot of money,” Kilani explains. They are more interested in the collaborative experience that awaits them.

Everyone involved in the documentary is an aspiring filmmaker, and collectively they have produced work for the NFL Network, HD Net, and Fox Sports. They see the song that inspired the title of their documentary, “All My Friends,” as an “anthem… a reminder to hold onto the relationships and experiences you make. No matter where you are in your life, physically or mentally, you can find comfort in knowing you have made friendships, and will continue to make friendships that will fill your time here on Earth with more meaning than any career or material possession will ever be able to.”

By mirrormmg March 13, 2011
in Life and Arts
Related Posts