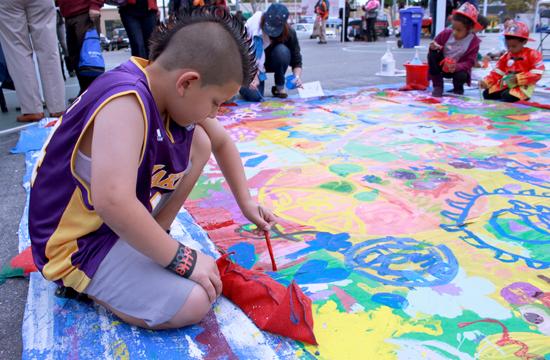 The day was chilly and gray, and the smell of bacon–wrapped hot dogs, Got Tacos, and Kettle Korn wafted through Virginia Avenue Park in Santa Monica on the afternoon of March 6 as crowds gathered to join in on the community spirit at the Fifth Annual Unity Resource Festival.

This year’s theme was “Mind Body Spirit,” and Co-chair and Co-founder of the festival Marcia Fierro explained that the theme “goes along with the active lifestyle campaign that the city has put together.” The goal was to inform Santa Monica residents about programs and opportunities in the community that strengthen the mind, the body, and the spirit.

The cold weather didn’t stop people from dancing to live mariachi music and visiting the many booths spread around the park. The Office of Sustainability and the Environment handed out free reusable bags made by local veterans from the West Los Angeles VA, in anticipation of the City’s upcoming enforcement of the recent ban on plastic shopping bags. Environmental Analyst Josephine Miller happily handed out bags to people who stopped by the booth, noting that the “amount of people that have responded [this year] has been really vibrant. It has been fantastic.”

A few booths down, Rosie’s Girls Santa Monica distributed information about their program, which serves to inspire and educate young girls in the community by teaching them things such as self-defense, welding, creative expression, and self-reliance. Tatiana Miranda, an eleventh-grade girl who has been involved with Rosie’s Girls since she was in the fifth grade, proudly sported her Rosie’s Girls T-shirt despite the cold weather, and said her years in the program have provided her with an invaluable experience. “It’s a fun, great community project,” Miranda said. Several other girls handed out information about the program to curious passersby.

The music coming from the main stage infused the park with a festive spirit and several children took advantage of a booth that allowed them to paint on a communal canvas provided by the local PTA and the Santa Monica-Malibu Education Foundation. The communal creation added a splash of bright, cheery color to the gray, cloudy day.

“We’re famous for our pencils,” said Fire Safety Coordinator Suzanne Post, explaining that the pencils change color, making them a hit with the kids. Post found this year’s Unity Festival much busier than previous years, which is an encouraging sign for the community.

Festival Co-Founder Fierro sees the annual Unity Festival as a chance to bring the diverse factions of Santa Monica together in one place. Unlike celebrations like Cinco de Mayo and Juneteenth, the Unity Festival is a day for everyone, and a day to remind people how diverse Santa Monica is as a community.

“Everybody coming together is important,” Fierro explained. “This year’s festival was different in the fact that we put more emphasis on what makes up a community.” This year boasted more resources and more participants than years past, and Fierro has high hopes for future festivals. She says her favorite moment of this year’s Unity Festival was when “everybody got together and just started dancing, It was a spontaneous moment and it was moving to me seeing people celebrate our community by dancing.”

By mirrormmg March 7, 2011
in Life and Arts
Related Posts