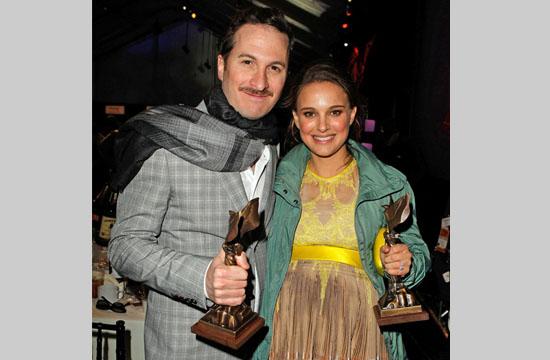 Despite being assaulted by fierce winds and the lingering dampness from the torrential downpour the night before, hundreds of folks in the film business, nominees, and their supporters, turned out for this most relaxed awards ceremony to honor filmmakers who made their movies independent of studio financing, bringing their artistic vision to fruition, many times with great difficulty.

In what was a less than popular change of venue last year to a downtown Los Angeles location at L.A. Live, this year Film Independent’s Spirit Awards. Reverted back to its traditional afternoon awards luncheon format in Santa Monica and once again the event was a fun, relaxed gathering of the film community.

Red carpet arrivals began at 11:30 a.m., with the ceremony starting at 2 p.m. The program aired on IFC at 10 p.m. that evening. Fans who wanted to get a glimpse of some of their favorite movie stars were welcomed, cameras in hand, as viewing barriers were set up.

Now in its 26th year, this highly informal jeans-and-tees event was founded in 1984 and was originally called FINDIE Awards (“Friends of Independents”). It has steadily grown in popularity to become a barometer of the Academy Awards held the next day.

Film Independent Executive Director Dawn Hudson put together a producing team that included Audrey Morrissey of Live Animals as the new Executive Producer, who joined Barry Adelman of Dick Clark Productions, who returned for a second year as producer.

This year’s crop of nominations for Best Feature was an especially rich list, including “127 Hours,” “Black Swan,” “The Kids Are All Right,” “Winter’s Bone,” and “Greenberg,” with “Black Swan” taking the prize, along with garnering the Best Director award for Darren Aronofsky and Best Female going to Natalie Portman who also won Best Actress at the nex day’s Academy Awards. Especially gratifying was the award for best first feature, which went to Sony Pictures Classics’ “Get Low” as the riveting, compelling performance given by Robert Duvall could stand as a “how to” acting lesson for actors – whether aspiring or seasoned.

Exit Through The Gift Shop

Congratulations to all the winners and may next year bring another collection of outstanding independent films.

Following scoring the Best Male award for his performance in “127 Hours,” James Franco, as well as some of the other winners, participated in a brief Q & A in the very breezy press tent crammed with journalists from all over the world. For a change of pace, Franco talked about his recent appearance on “General Hospital” as well as a Yale University project in which he is involved.

Is acting on a soap opera different from film acting?

Franco: Before I got on the set, I wondered if I had to act differently, but when I settled in, I realized that my job was to act realistically within the parameters of that world. While the technical aspects are different – the makeup, cameras, lighting, etc., the acting is the same whether you’re on a soap or in a film.

How involved do you get with the technical side of filmmaking?

Franco: When I first started acting I didn’t want to know about the technical side. To me it was about living the emotions of the character. But, I do see that movies are a collaborative art form and you have to be aware of cameras, blocking, and all those other considerations, so instead of trying to ignore everything, I try to work with it.

Can you talk about your Yale project?

Franco: I am interested in capturing young people in the theatre and I’m working on a project at Yale using a live stage play, but also digital technology.

By mirrormmg March 3, 2011
in Life and Arts
Related Posts