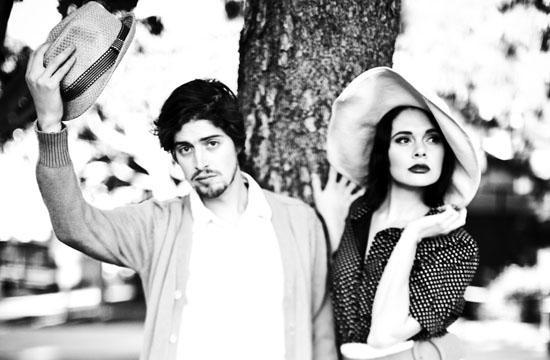 Westside locals Ben Jaffe and Suzanne Santo prove that musical talent really can thrive on this side of the 405. The guy-girl duo formed the band honeyhoney, which defies a strict genre and creates foot-stomping music that evokes an era long ago.

In the midst of a month-long residency at the Bootleg Theater, just a stone’s throw from downtown Los Angeles at 2220 Beverly Boulevard, honeyhoney performs every Monday night backed by a full band. It’s a free show – that’s right, free – that will leave any Westside music lover glad they made the trek.

Led by mostly acoustic guitars and the soulful voice of Santo, who plays both the fiddle and the banjo, honeyhoney evokes an old-time radio feel that would fit right in on the soundtrack of a modern-day Tarantino film. Their debut album, “First Rodeo,” was full of grit and romantic doubt and was released by Ironworks Records, a label co-owned by Jude Cole and “24” actor Kiefer Sutherland. Soon to follow is a sophomore endeavor that focuses on bluegrass and country roots and will be entitled “Billy Jack.”

If you ask Santo to choose from one of the group’s many influences (country, folk, rock, bluegrass, or the crooning of Nancy Sinatra) she’ll be the first to admit that their sound does not commit to one genre. She explained that their “cocktail of songs” are mixed according to Santo’s voice and their instruments. The two are all about mastering their own style.

“Each genre goes so deep and it’s a difficult thing to really own them, because the more you play a certain kind of music you realize there is a huge tradition that goes behind it,” Jaffe said. “We are just trying to learn our own zone of music.”

Jaffe, who moved from Los Feliz and now lives in Santa Monica, said that despite enjoying the urban scene of the eastside, he is quite comfortable in the beach-style house he shares with his girlfriend not far from Virginia Avenue Park. Santo has been a Venice local since first arriving in Los Angeles more than eight years ago. She says the laid-back vibe of the community keeps her by the ocean.

Before pairing up musically, the two lived a seemingly typical L.A. existence with Santo working as a part-time actor and Jaffe composing music for Nickelodeon cartoons and for several different bands. The two met at a Halloween party through a mutual friend and the 20-somethings began collaborating soon after. The duo quickly gained notoriety on the Internet and by 2007 Jaffe and Santo decided to get serious and make honeyhoney a full-time gig.

“We love taking it down to that organic and acoustic section,” Santo said. “[For the residency] we have this full band and we got all these different elements that are really big in terms of sound, which is really cool about the Bootleg because it’s our opportunity to headline.”

The band will perform two more free shows at the Bootleg Theater on March 21 and 28. To celebrate the release of “Billy Jack” honeyhoney will hit the road April 29 as a paired-down duo along with Australian world music artist Xavier Rudd. They plan to reunite with a full band for a May 2 performance at the El Rey Theater in Los Angeles. To learn more about the full tour, visit honeyhoneyband.com.

By mirrormmg March 17, 2011
in Life and Arts
Related Posts