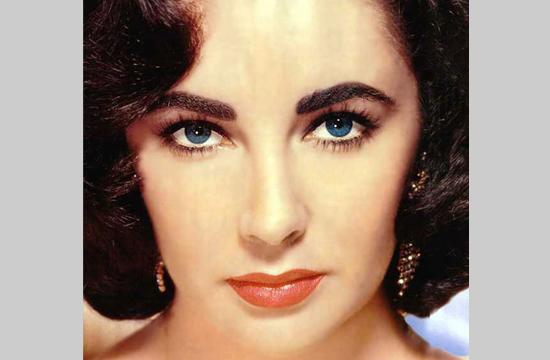 “Cleopatra.” “Cat on a Hot Tin Roof.” “National Velvet.” “Butterfield 8.” “Who’s Afraid of Virginia Woolf.” These are just a few of the great films that set Elizabeth Taylor apart and made her a true national – and international – icon.

Taylor passed away in the early hours of Wednesday, March 23, leaving in her wake a legacy of grace, beauty, scandal, passion, and pure talent. Yes, she had seven husbands (twice married and divorced to Richard Burton, the love of her life), drank like a sailor, and was at times accused of flaunting her extreme riches, but above all else she was one of the most talented actresses to ever grace stage or screen, and a devoted philanthropist. Taylor was one of the first stars – if not the first – to raise awareness and money for AIDS, a cause she supported with all of her heart.

Even as a young child Taylor’s beauty, and her striking eyes, made her stand out from the crowd. It seems she was destined for stardom. Born in London, she rose to fame appearing as a young actress in America classics such as “Lassie Come Home” (with her lifelong friend Roddy McDowall) and “National Velvet,” and she transitioned gracefully from child star to world-class actress. Unlike so many celebrities today who succumb to the pressures of experiencing fame and fortune at a young age, Taylor remained committed to her craft and despite a few career misses (remember “Boom”?) she never missed a beat.

She met Burton – a married with children Welshman who loved his poetry and his cocktails in equal measure – on the set of “Cleopatra.” He played Antony to her Queen of the Nile. The two had met years before starring together, and rumor has it that Burton burst out laughing when he first laid eyes on her, because her beauty was so astounding. She paid no mind to Burton at the time, saying that she didn’t want to be another notch on the reported ladies man’s belt. On the set of “Cleopatra,” however, their passion was undeniable and they quickly fell in love.

Taylor’s many marriages (to Eddie Fisher, Nicky Hilton, and Michael Todd, to name a few) made her the object of scorn and scandal at times throughout her life, but it was her passionate love affair with Burton that transformed them into the “Brangelina” of their time. They were followed by paparazzi from their beloved Puerta Vallarta to their yachts to their many film premiers. The public could not seem to get enough of the rich and powerful duo, and the pressures of fame wore on their relationship at times.

Burton once said of his lady love, “I introduced Elizabeth to beer; she introduced me to Bulgari.” He was a rough and tough Welshman from a working-class family; she was a pampered beauty who never knew the perils of poverty. Despite their differences the two formed a deep bond and mutual admiration of each other’s talents. Their performances together in the black and white, dark comedy “Who’s Afraid of Virginia Woolf” are a testament to their immense talents – both as individuals and partners. For a recent in-depth look at the Taylor-Burton love affair, the book “Furious Love” by Sam Kashner and Nancy Schoenberger is a must read.

It is difficult today to think of an actor or star that could rival Elizabeth Taylor, and she truly was one of the last great movie stars. Angelina Jolie (who is slated to step into Taylor’s shoes in a remake of “Cleopatra”) and Natalie Portman may come close to her beauty and her talent, yet they do not possess that Hollywood Glamour that Taylor understood so well. She was a classy broad wrapped in diamonds and furs that also loved her cocktails and had a penchant for swearing like a truck driver at times. In other words, as Larry King recently said, “She was a broad in the best sense of the word.”

Her friendship with Michael Jackson, her perfumes, her diamonds, and her feebleness in recent years have made some target Taylor as an object of ridicule. Yet her legend transcends all of that. Part of her power is that Taylor rarely worried about what others thought of her – hence early AIDS advocacy when it was still considered a taboo disease. She may have loved diamonds and luxury, but she never forgot the things that truly mattered in life. Her class, talent, and beauty will be with us forever.

By mirrormmg March 24, 2011
in Life and Arts
Related Posts